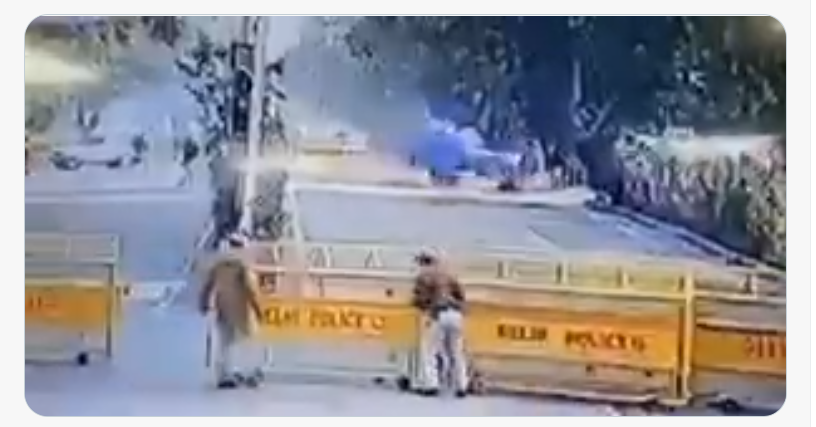 New Delhi/IBNS: A farmer, who participated in yesterday's tractor rally in the national capital, died in Delhi's ITO area due to injuries when his tractor hit the police barricades and overturned and not from police firing as claimed by his fellow protesters, according to postmortem report, Uttar Pradesh Police said.

The footage of the accident showed his blue tractor, in an attempt to break the cordon, crashed into the police barricades and overturned twice before stopping on the side of the road.

"The post-mortem report clarifies that he was not shot. He died of the antemortem injuries which he received after his tractor overturned as seen in a viral video," Avinash Chandra, a senior UP police officer, was quoted as saying by news agency ANI.

The man, who has now been identified as Navrit Singh from Uttar Pradesh's Rampur, had recently returned to his native village from Australia where his wife is a student, reported NDTV.

Police had allowed the rally from 11:30 am after the end of the Republic Day parade at the Rajpath. However, the farmers who were supposed to take out the rally on the Ring Road, started pouring into the capital from 8 am, knocking down barricades and clashing with the police.

The farmers who were trying to reach the Red Fort were stopped by the police at the ITO.

Farmers, riding on their tractors, tried to evade blockades by recklessly driving their tractors and attempting to mow down the policemen.

The Delhi police used tear gas shells and cane-charged the farmers to disperse the crowd. A DTC bus was also vandalised by the protestors.

More than 300 people were also injured in the clashes and 22 cases have been registered, Delhi Police said today.

The farmers' unions have distanced themselves from the violence and alleged a conspiracy to derail their agitation.