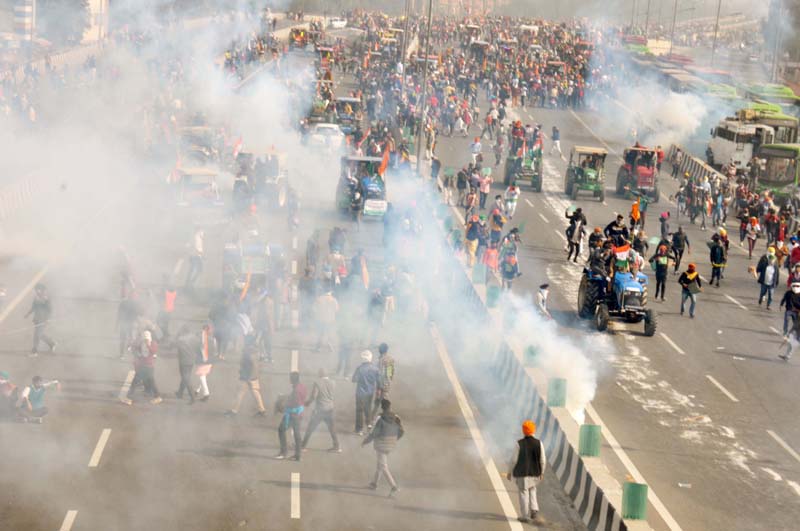 New Delhi/UNI: The Samyukta Kisan Morcha (SKM), a body representing farmers, has condemned and regretted the violence that erupted in Delhi after a certain section of farmers forcibly entered the National Capital.

SKM, in a statement, said that they express their gratitude towards the farmers for the unprecedented participation in today's Farmers Republic Day Parade, however, disassociated themselves from those who indulged in acts of violence.

"We condemn and regret the undesirable and unacceptable events that have taken place today and dissociate ourselves from those indulging in such acts," the statement read.

Hundreds of protestors managed to reach Red Fort which is nearly seven kilometers away from the Rajpath where the Republic Day parade concluded peacefully at noon.

At the Red Fort, a group of protestors, entered the premises and hoisted flags.

A fierce battle between the protestors and police personnel erupted at the ITO in central Delhi. As per visuals, police tried to halt the protestors.

Lathi charge and tear gas were used. Several protestors attacked the police personnel with sticks and stones. Scores of people as well as policemen were injured but no official figure has been determined yet. Several buses were also vandalised by the protestors.

The SKM further said that despite all our efforts, some organisations and individuals violated route and indulged in condemnable acts.

"Anti-social elements had infiltrated the otherwise peaceful movement. We've always held that peace is our biggest strength & any violation would hurt the movement," it said.

The farmer's body appealed the protestors to stick to the route and norms of the parade, and not indulge in any violent action or anything that taints national symbols and dignity.

Till now, according to sources, one farmer has lost his life in the ITO area of the capital.