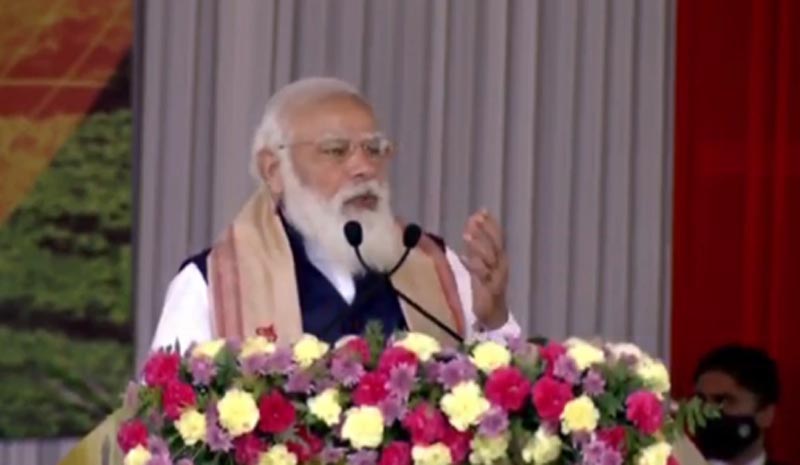 The Chief Minister and Ministers of Assam Government and Union Minister, Shri Rameswar Teli were also present on the occasion.

Speaking on the occasion, the Prime Minister said that with over 1 lakh native families of Assam getting the right to land, a big concern has gone away from the life of people in Sivasagar.

He said today’s event is connected with self respect, independence and safety of the native people of Assam.

He noted the importance of Sivasagar which is known for the sacrifices for the country.

The Prime Minister remarked that as the nation is remembering Netaji  on his 125th birth anniversary, 23rd January is being celebrated as ‘Parakram Diwas’.

The Prime Minister said that even after so many years of independence, there were lakhs of families in Assam who were earlier deprived of land.

He added when the Sonowal Government came to power, more than 6 lakh tribals had no papers to claim their land.

He lauded Sonowal Government for its new land policy and its commitment towards the people of Assam.

He said due to the land lease, the long demand of the original inhabitants of Assam has been fulfilled.

This has also paved the way for better standard of living for millions of people.

He said now with the right to land these beneficiaries can be assured of the benefit of many other schemes, which they were deprived of, like PM Kisan Samman Nidhi, Kisan credit card, Crop Insurance Policy. Not only this, they will also be able to get loans from banks.

The Prime Minister said rapid development and social protection of the tribals in Assam has been the commitment of the government.

He said many steps have also been taken to encourage Assamese language and its literature. Similarly, the great personalities of every community have been honored.

Last 4 and a half years, many efforts have been made to preserve historical objects of religious and spiritual importance.

He added that rapid steps are also being taken to free the encroachment and improve the Kaziranga National Park.

The Prime Minister remarked that for a self-reliant India, rapid development of North East and Assam is necessary.

The road to self-reliant Assam passes through the confidence of the people of Assam. Confidence only grows when basic facilities are available and the infrastructure is better. Over the years, unprecedented work has been done in Assam on both these fronts.

In Assam, Jan Dhan bank accounts have been opened for about 1.75 crore poor. Due to these accounts, money was transferred directly to bank accounts of thousands of families in the time of Corona.

In Assam, almost 40 percent of the population are covered under Ayushman Bharat scheme. Out of which about 1.5 lakh have received free treatment.

Toilet Coverage in Assam has increased from 38 percent to 100 percent in the last 6 years.

Five years ago only less than 50 percent of households had access to electricity, which has now reached almost 100 percent household.

In Assam under Jal Jeevan mission, in the last 1.5 years piped water connections have been provided in more than 2.5 lakh homes.

The Prime Minister said that these facilities benefit the women the most. Ujjawala Yojna has brought gas connections in the kitchen of 35 lakh families of which 4 lakh are SC/ST category. LPG gas coverage has reached 99 percent from 40 percent in 2014.

The number of LPG distributors moved up to 576 from 330 in 2014. More than 50 lakh free cylinders were distributed during the Corona period. Ujjwala has brought the ease of living for the women of the region and the new distribution centers brought new employment.

Talking about the mantra of his government, Sabka Saath, Sabka Vikas, Sabka Vishwas, the Prime Minister said that the government is taking the benefit of development to all the sections.

He mentioned many steps taken to uplift the status of the Chai tribe that suffered for a long time due to neglect.

The homes of the tribe are being provided toilet facilities, children are getting education, health facilities and employment. Chai Tribe members are being linked to banking facilities and getting the benefits of various schemes directly in their account.

The Prime Minister also pointed out that the tribe’s contribution is being recognized by erecting statues of their leaders like labour leader Santosh Topno.

The Prime Minister said that every region of Assam is on the path of peace and progress due to the policy of taking every tribe together.

With the historic Bodo agreement, a large part of Assam now has returned to the path of peace and development.

The Prime Minister enumerated steps taken during the last six years for modernization  of connectivity and other infrastructure.

Assam and the Northeast are instrumental in enhancing India’s connectivity with East asian countries. Assam is coming up as a major center of Aatmanirbhar Bharat due to its improved infrastructure.

The Prime Minister listed 11 thousand kilometers of roads in Assam villages, Dr. Bhupen Hazarika Setu, Bogibeel Bridge,Saraighat Bridge and many other Bridges that have been built or are being built have strengthened the connectivity of Assam.

Additionally, waterways connectivity with Bangladesh,Nepal, Bhutan and Myanmar is also under focus. Increasing  rail and air connectivity is bringing in better industrial and employment opportunities in Assam.

New modern terminal and custom clearance centre  at Lokpriya Gopinath Bordoloi International Airport, Modernization of Roopsi airport in Kokrajhar, Multi Modal logistics hub in Bongaigaon will give a fresh push to the industrial development of assam.

The Prime Minister said that Assam is a major partner in taking the country in the direction of the gas-based economy.

More than rupees 40 thousand crore have been spent on oil and gas infrastructure in Assam. Guwahati-Barauni gas pipeline will strengthen the connectivity between the Northeast and eastern India.

Numaligarh refinery has been augmented with a bio-refinery facility, that will make Assam a major producer of biofuel like ethanol.

Upcoming AIIMS and Indian Agricultural Research Institute  will provide new avenues to the youth of the region and will make iot the hub of health and education, concluded the Prime Minister.