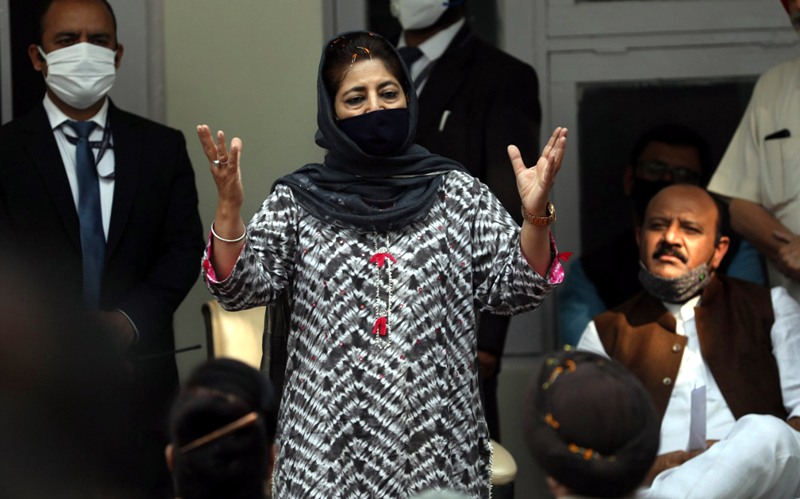 Srinagar/UNI: Lashing out at the central government over leaked conversation between Republic TV editor-in-chief Arnab Goswami and ex-BARC CEO Partho Dasgupta about Balakot strikes in 2019, former Jammu and Kashmir Chief Minister Mehbooba Mufti said that national security and issues of monumental importance have been reduced to a TRP tamasha that benefits BJP and creates false narratives.

Mehbooba, who is the president of Peoples Democratic Party (PDP), said whosoever questioned the timing of the Balakot strikes in 2019 was criticised and dubbed as anti national.

"Today we stand vindicated that it was done to benefit a particular party in the elections and not to avenge the martyrs of Pulwama attack," the former Chief Minister wrote on micro-blogging site twitter.

"When GOI deployed lakhs of troops in Kashmir in July 2019 & evacuated tourists they justified these actions & lied to the world about a potential terror attack by Pakistan as the reason,” she said.

"National security & issues of monumental importance have been reduced to a TRP tamasha that benefits BJP & creates false narratives. Masses are conditioned to believe fake news, hate imagined enemies within & outside the country. Nation wants to know who will pay the price for this?” she wrote.

The PDP president said had this been the case, the Centre would have paid China back in the same coin for killing 20 Indian soldiers at Galwan valley.

"Who knows what would have been their reaction if elections were around the corner,” she asked.