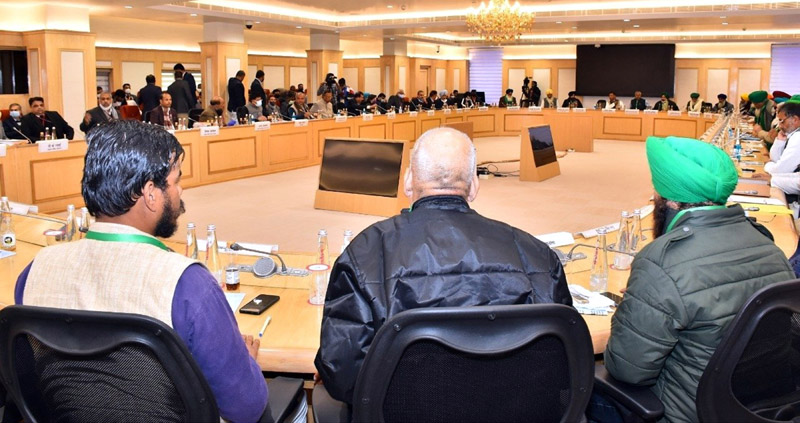 Ninth round of Centre-farmer talks fails to end stalemate

New Delhi/IBNS: The ninth round of talks between farmers' representatives and Centre ended on Friday without any progress to end the stalemate over the three contentious agriculture laws.

"It was a 120 per cent failure. We suggested that the government remove the changes made to the Essential Commodities Act instead of scrapping it altogether. But the Agriculture Minister has not said anything on this," farmer leader Dr Darshanpal told mediapersons.

This comes after the Supreme Court stayed the enactment of the three contentious farm laws until its further orders.

The next round of talks would be held on Jan 19, the day the Supreme Court-appointed committee is scheduled to start consulting stakeholders to end the impasse.

The farmers have also warned of intensifying their protest against the Centre's farm laws by holding a tractor rally on Jan 26.

Leaders of the 40 farmers' unions negotiating with the government said they want continued direct communication with the Centre, "not brokers".

The government has agreed to engage directly with farmers but said that if they want, they can go to the court-appointed committee as well.

"The government and farmers should continue looking for solutions, formally and informally. Whatever we can agree on during these talks will decide the future course of action. The government is committed to follow the Supreme Court's order," Union Agriculture Minister Narendra Singh Tomar said.

Dealing a blow to the ruling NDA government, the Supreme Court on Jan 12 suspended the three contentious farm laws that triggered the farmers' protests and said a committee would be formed for a negotiated settlement of the impasse.

It seems that there might be two different levels of talks going on simultaneously with the Centre agreeing to continue negotiating with the farmers' representatives.

Thousands of farmers are camped in Delhi-Haryana border since the end of November with the sole demand of the repeal of the laws enacted by the central government through an Ordinance amid the Covid-19 pandemic.