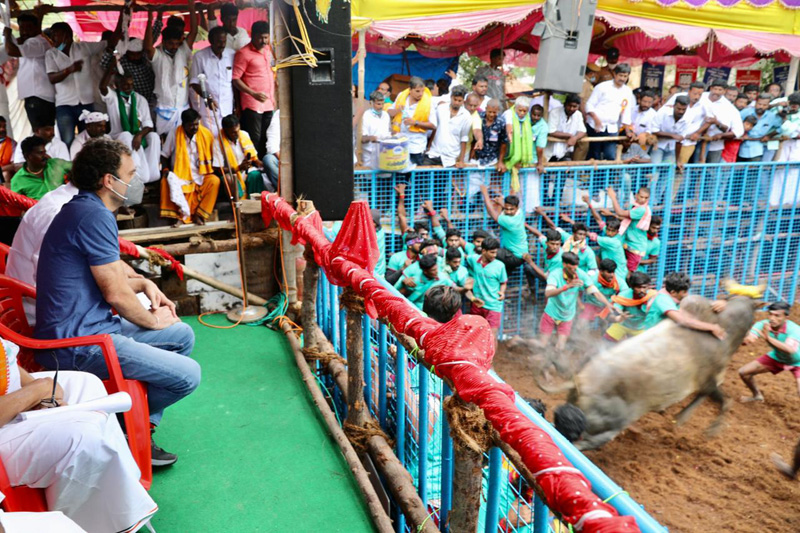 Chennai/IBNS: In a U-turn from his party's earlier stand on Jallikattu, Congress MP Rahul Gandhi on Thursday attended the annual bull-taming sport here in Tamil Nadu, which will soon plunge into an electoral contest.

Gandhi, who belongs to the party which had earlier opposed the sport, on Wednesday was present at the event during Pongal celebrations with ally MK Stalin, who heads Tamil Nadu's opposition party DMK.

Shri @RahulGandhi enjoys lunch with women and children in Madurai as part of Pongal celebrations.#VanakkamRahulGandhi pic.twitter.com/WisJjWh3R3

"I have come here as I think Tamil culture, and history are essential for India's future and need to be respected," Gandhi told reporters.

"It was quite a lovely experience to see Tamil culture, history in action. I thank the Tamil people. I'll be coming back here, not once but numerous times," the former Congress president added.

"I'm happy that Jallikattu is being organised in a systematic and safe way that both the bull and the youngsters are safe and everybody is being taken care of," he said.

However, it was the same Congress party which had banned Jallikattu while it was in power at the Centre.

In 2011, the Congress-led national alliance, with Jairam Ramesh as the Environment Minister, had banned the use of bulls as performing animals.

Shri @RahulGandhi greets the people and players at the Jallikattu arena. #VanakkamRahulGandhi pic.twitter.com/kiuXXDoa1n

In the 2016 assembly elections, the grand old party had promised a ban on the sport in its poll manifesto.

But since then the things have changed with Jallikattu emerging as the symbol of pride in Tamil Nadu, where the Congress is eyeing a chance to wrest power in an alliance with the DMK.

In the 2019 General Elections, the Congress-DMK alliance had managed to win 31 of 38 Lok Sabha seats outshining the AIADMK.

The next state polls are due to be held in summer this year.