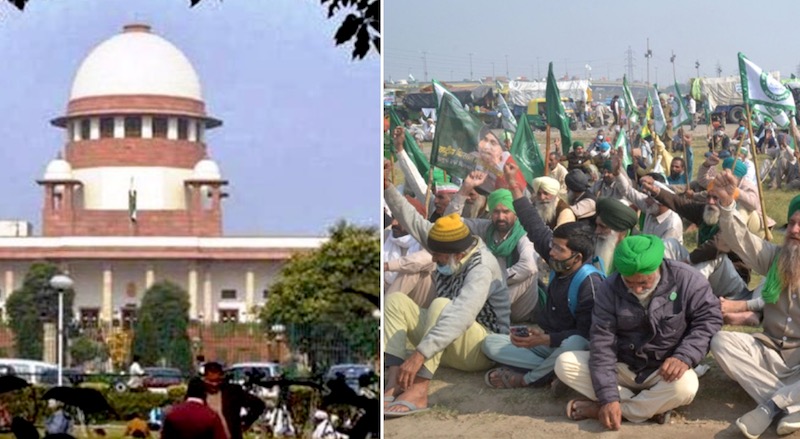 Supreme Court suspends farm laws at the core of farmers' protest, orders a committee for negotiations

New Delhi/IBNS: Dealing a blow to the ruling NDA government, the Supreme Court on Tuesday suspended the three contentious farm laws that triggered the farmers' protests and said a committee would be formed for a negotiated settlement of the impasse.

"We are trying to solve the problem in the best way. One of the powers we have is to suspend the legislation," Chief Justice SA Bobde said as quoted in media.

"We are staying three farm laws until further orders," he said.

In a setback earlier for the Narendra Modi government in the courtroom over the ongoing farmers' protests, the Supreme Court on Monday asked the Centre to suspend the farm laws which have triggered the massive agitation in and around the national capital.

"Tell us whether you will put the laws on hold or else we will do it. What's the ego here?" said the top court.

Chief Justice of India (CJI) Sharad Arvind Bobde said, "Each one of us we will be responsible if anything goes wrong. We don't want any injuries or blood on our hands."

In a message to the protesters, the top court said the protests could go on after the implementation of the laws was stayed.

So far the government had eight rounds of talks with the farmers' unions but failed to break the deadlock as the farmers refused to agree with the Centre's decision to amend the laws and demanded repeal of the laws.

The CJI said the court is forming a committee to solve the probem and asked the parties to give the names so that it can decide, he added.

Earlier, the Supreme Court has named four members to the committee. An NDTV report said former Chief Justice of India RM Lodha who was asked to head the committee has refused said.

"I declined the offer to head the panel," Justice (retd) Lodha told NDTV.

The apex court also issued notice to farmers' unions who had threatened on Delhi Police's petition to stall a tractor rally during January 26 Republic Day parade.

The court also rejected argument placed by the lawyer of the farmers ML Sharma that the farmers will not be a part of the committee as Prime Minister Narendra Modi had refused to talk to them, saying that the PM is not a party before the court.

"This is not politics. There is a difference between politics and judiciary and you will have to cooperate," the court stated.