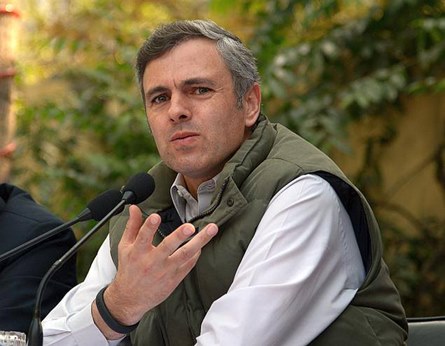 India Blooms News Service | | 22 Dec 2014, 05:45 pm
#Omar Abdullah, # Jammu and Kashmir polls, # Alliance in Jammu and Kashmir
Srinagar, Dec 22 (IBNS) Jammu and Kashmir Chief Minister Omar Abdullah on Monday said he does not foresee any tie-up with the Bharatiya Janata Party (BJP) or its former ally Congress even as the state awaited the poll results on Tuesday when the counting of votes of the just conclued election will be conducted.
Abdullah in a press conference here said he has no regrets of alliance with Congress and also downplayed any future tie-up with the BJP saying that Prime Minister Narendra Modi remained silent on the issue of conversion.
He said there is no communication with the BJP while on the issue of him backing the Atal Bihar Vajpayee for Bharat Ratna he said he always supported it having worked with him as a minister in his government.
He said Vajpayee deserves Bharat Ratna.
The counting of votes will be held on Tuesday in Jammu and Kashmir which witnessed a record turnout in the multi-cornered contests to elect their assembly representatives and a new assembly.

After completion of the five phases of polling in Jammu and Kashmir on Dec 20 with overall 66 percent turnout in all five phases, now everyone is awaiting the results.

Jammu and Kashmir, where polling was held for 87 seats, witnessed large turnout since 1987 despite boycott calls from separatist groups as well as militant outfits.

In the 2008 Assembly Election, the ruling National Conference (NC)  of Omar Abdullah emerged as the largest party winning 28 seats out of 87 Assembly seats.

PDP was second with 21 seats while the Congress got third spot winning 17 seats, BJP, however, could win only 11 seats.

In an early Exit Poll which claimed that People's Democratic Party (PDP) is going to emerge as the single largest party in Jammu and Kashmir, PDP is projected to win within a range of 35-40 seats in a House of 87.