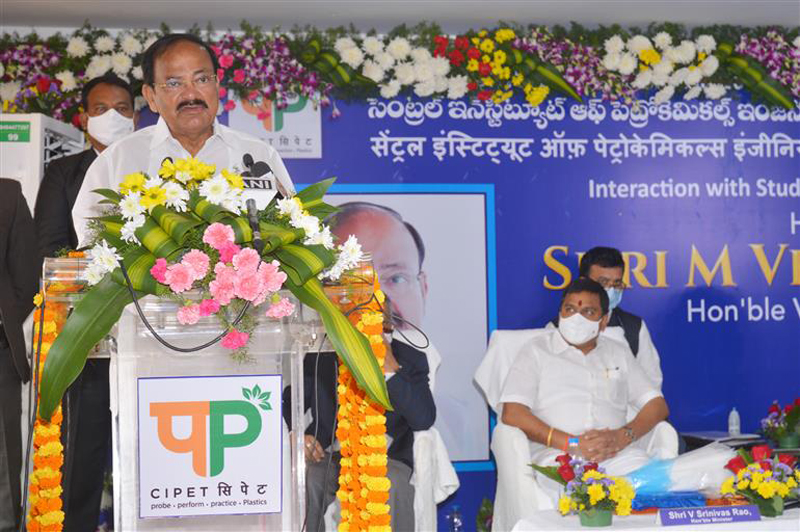 He emphasised that the problem is not with plastics, instead the problem lies in our attitude towards handling of plastics.

Addressing the students, faculty and staff of the Central Institute of Petrochemical Engineering & Technology (CIPET) in Vijayawada today, the Vice President expressed concern about the environmental challenge posed by the durability and longevity of plastics.

He stressed the need to follow the best practices of plastics waste management and wanted people to be made aware of the importance of the 3Rs - Reduce, Reuse and Recycle.

"The solution is not to avoid plastics, but to ensure that it is used responsibly and recycled properly," he said.

Citing the example of Swachh Bharat Mission, he called for a similar nationwide campaign to educate people on single use plastics and wanted media, civil society organisations, students and activists to be an integral part of this awareness drive.

The Vice President said that people have to understand the deleterious impact of single use plastic on our environment and think about the future of mankind.

Maintaining that we are duty bound to leave a clean and green planet for our children, he appealed to everyone to commit to use the single use plastic items responsibly.

Mentioning that the plastics recycling market in India is estimated to grow at a rate of 6.5 % to attain a market size of 53.72 billion dollars by the end of 2023, Shri Naidu highlighted that waste management presents a golden opportunity for our entrepreneurs.

He appreciated CIPET for establishing a model Plastics Waste Management Centre at Guwahati, which focuses on offering skill development training programmes in the areas of plastics recycling and waste management.

Calling polymers as wonder materials, the Vice President said that they have increased the quality of life immensely and have become an important part of the global economy due to their low weight, durability and resourcefulness. He noted that their versatility and advancements in cost-effective manufacturing techniques have led plastics to replace the conventional materials in different walks of life.

Shri Naidu specifically appreciated the importance of plastics during the ongoing COVID-19 pandemic as they have been used extensively in manufacturing of medical protection equipment and PPE kits, which have played a significant role in preventing its spread.

Underlining the importance of polymers in Indian economy, the Vice President said that 30,000 plus plastics processing units are employing over four million people across the country.

He also mentioned that with an average national consumption of roughly 12 kilograms per capita per year, India ranks among the top five consumers of polymers in the world.

Observing that the demand for polymers is growing by 8%, the Vice President said that the global petrochemical industry is projected to reach USD 958.8 billion by 2025.

He opined that various Government programs like Make in India and Start-up India will go a long way in creating the ecosystem for the next-generation research and indigenous technological advancements in the Petrochemical sector.

The Vice President said that the availability of domestically manufactured raw materials is one of the major strengths of the polymer industry which will help in its growth.

Terming the current trend in India's plastics exports as highly encouraging, he said that the Indian plastics export industry has always offered excellent potential in terms of capacity, infrastructure, and skilled manpower.

He praised CIPET for its contribution to national development through its diversified activities in the area of skilling programmes, technical support services, academics and Research & Development.

The Vice President expressed his happiness that the CIPET has completed more than 50 major research projects and has filed 12 patents.

He also wanted the institute to focus on the development of eco-friendly products such as biodegradable plastics so as to balance the environment and development.

Naidu said that with a median age of less than 30 years, India is among the youngest countries in the world.

He wanted this youth energy to be constructively channelized for nation building through proper skilling and right motivation.

Stating that the ‘Future is skilling’, Naidu praised the Prime Minister, Shri Narendra Modi for creating a separate Skill Development Ministry for this purpose.

He noted that good work being done by CIPET in the field of skilling and complimented it for training more than three lakh unemployed/under-employed youth through its skill development programmes in the last five years.

Noting that 16 new CIPET Centres have been set up since 2015-16 to give a fillip to the skill requirement of growing petrochemical industry, the Vice President hoped that CIPETwill play a key role in establishing technical supremacy of our country in this field.

On this occasion, Naidu fondly recalled his association with CIPET, Vijayawada when he had laid its Foundation Stone in 2016 along with the then Minister for Chemicals & Fertilizers and the Chief Minister of Andhra Pradesh.

He expressed his satisfaction that CIPET, Vijayawada is striving towards excellence through its tie-ups with industries across Andhra Pradesh.