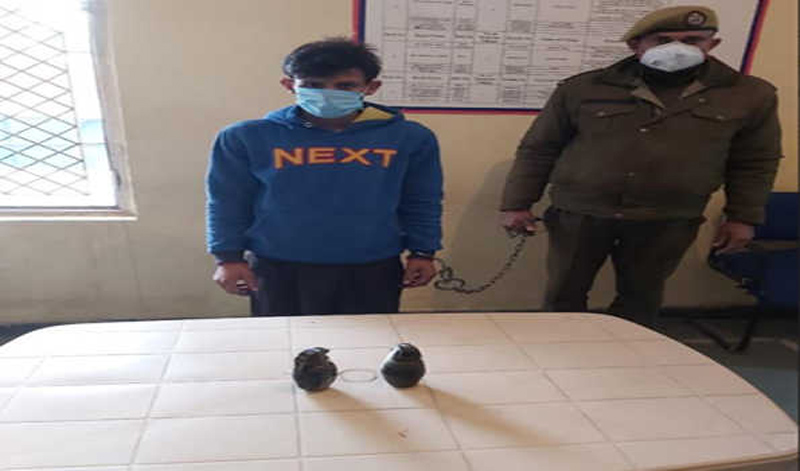 Jammu/UNI: Jammu Police have averted major terror attacks in the city by arresting a man with hand grenades from Narwal area here.

Inspector General of Police, Jammu Zone, Mukesh Singh here on Monday said that a naka was laid on Sunday night by police team at National Highway bye pass road and routine checking of vehicles was being done.

“Late in the evening at around 1930 hours, a man roaming suspiciously tried to flee away from the naka on seeing police personnel, but was apprehended,” said the top cop.

He added that two hand grenades, concealed in a bag he was carrying, were recovered from the possession of a man identified as Mohammad Ashraf of Lar, Mahore, Reasi, at present living in Peerbagh colony, Sunjawan, Jammu.

A case under explosive substance act is registered and investigation started.

“The arrested person is linked with the proscribed terrorist organization LeT and was tasked by the handlers from across the border to carry out grenade blasts in the city,” said Mr Singh. He added that the handler across was in contact with more terror operatives whose search is in progress.

With the timely action by Jammu police, possible terror attacks in Jammu city has been averted, he said

This is the second terror module linked with LeT which has been busted by the Jammu police in the past one week.

A similar module linked with TRF (LeT) was busted earlier in which two persons namely Raees Ahmad Dar of Churath, Devsar, Qazigund and Sabzar Ahmad Sheikh of Ashmuji, Kulgam were arrested with one Ak series rifle, one pistol, two magazines of AK rifle, 60 rounds of AK rifle and 15 rounds of pistol.