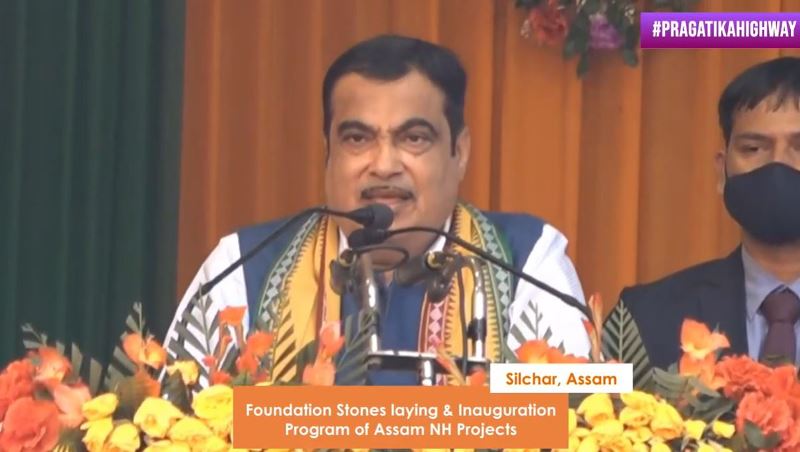 Synchronizing with the birth anniversary of former Prime Minister Vajpayee which is also observed as Good Governance Day, Chief Minister Sonowal and Union Minister Gadkari while attending a public meeting held at the playground of Rangpur High School in Silchar, attended Prime Minister’s Narendra Modi’s address to the farmers of the nation.

In the same programme, the Union Minister along with the Chief Minister laid the foundation stone of 27 projects including 439 km road involving financial outlay of Rs 2366 crore.

Further strengthening the pace of development in North East, inaugurated and laid the foundation stone for 27 National Highway Projects in Assam with an investment of Rs. 2,366 Crores in the presence of Chief Minister Shri @sarbanandsonwal ji, MoS Shri Rameshwar Teli ji, pic.twitter.com/Zka5l9hxv6

Speaking on the occasion, Union Minister Gadkari said that Vajpayee was a beloved leader who strengthened the democratic edifice of the country.

“He was a radiant personality who devoted his entire life for the farmers and poor people. His oratory skill kept everyone enthralled in Parliament and his amiable disposition endeared one and all. We cannot forget Atalji and we owe him a lot,” Gadkari said.

Gadkari moreover said that Vajpayee bestowed upon him the task of building the great Mahasadak vis-a-vis the over 3,000 km long East-West Corridor connecting Saurashtra in Maharashtra and Silchar in Assam.

In this context, Gadkari said the unveiling of a statue of a multifaceted personality like Vajpayeeji was the greatest honour and that it would inspire him to work with zeal and vigour for development of the country.

He said that Atal Bihari Vajpayee used politics as a tool for social reformation as he attributed the present Central government’s all-round efforts for bringing about paradigm shift in rural communication to Atalji’s vision.

He also said that the construction of national highway at Balicherra-Harangajao would be completed by March 2022.

Gadkari said that the works for NH between Jatinga-Harangajao and Harangajao-Mahur would begin from coming March.