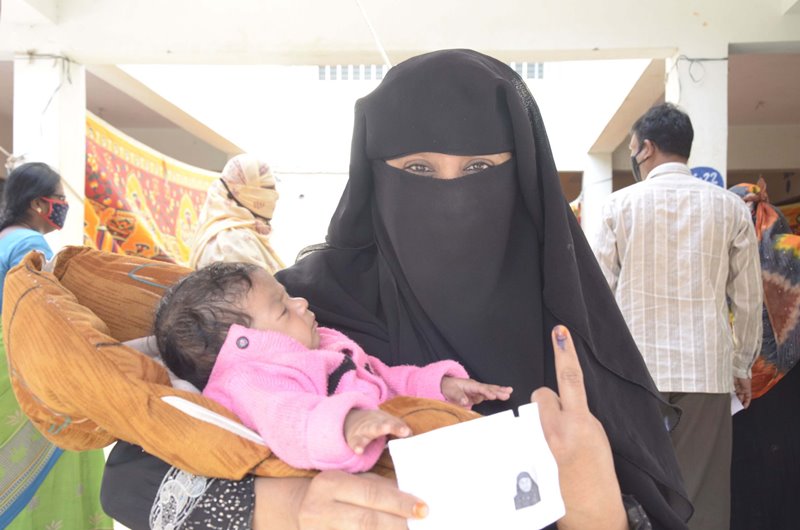 Srinagar/UNI: Around 48.62 per cent votes were polled on Tuesday in 43 constituencies during the second phase of District Development Council (DDC) elections in Jammu and Kashmir amid tight security arrangements.

“The voting for the second phase of DDC election concluded peacefully. A total of 48.62 votes were polled in J&K to decide the fate of 321 candidates, who were in the fray for 43 constituencies, including 18 from Jammu and 24 from Kashmir,” State Election Commissioner, K K Sharma told reporters here on Tuesday.

He said Kashmir valley recorded 33.51 per cent polling while 65.54 per cent electorates exercised their franchise in Jammu division during the second phase.

He said the highest votes were polled in Poonch with 75.07 per cent, followed by Jammu with 69.97 per cent.

“The lowest voter turnout was recorded in Pulwama with 8.67 per cent,” Sharma said.

Sharma said a large number of people had come out to cast their votes during the second phase of District Development Council Elections. “Long queues were seen despite of severe cold conditions in Kashmir Division and hilly areas of Jammu Division,” he added.

“As many as 321 candidates, including 196 from Kashmir division and 125 from Jammu division, are in fray during the second phase of District Development Council (DDC) polls in Jammu and Kashmir on Tuesday,” he said.

There are a total 280 constituencies in UT of J&K (14 in each district), of which, voting was conducted in 43 constituencies, including 25 from Kashmir Division and 18 from Jammu Division, from 0700 hrs to 14 hrs in phase II.

There are more than 57 lakh voters in J&K who are eligible to cast their votes in the DDC polls. Of these, more than 7.95 lakh voters, including 406845 from Kashmir and 388273 from Jammu, were eligible in phase II.

Special polling booths were also set up for Kashmiri Migrants at Jammu and Udhampur so that they can also participate in the election process.

The DDC elections and Panchayat By-Polls 2020 are being held in eight phases from November 28 to December 19. The counting of votes shall be conducted on December 22.