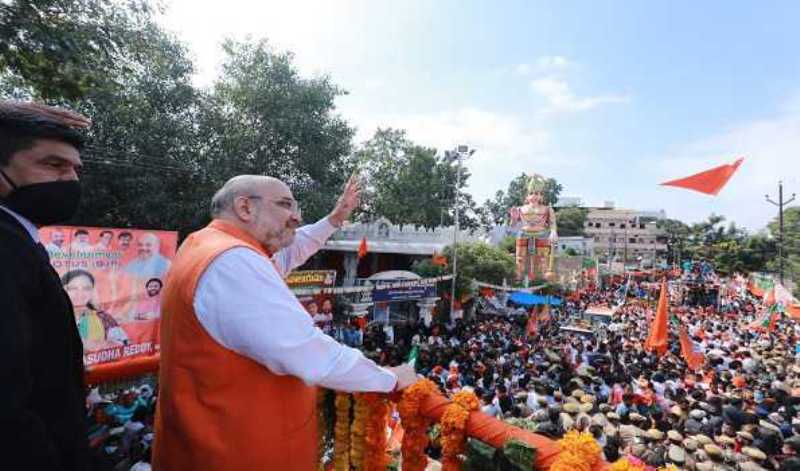 Hyderabad/UNI: Union Home Minister Amit Shah on Sunday said that they will free Hyderabad from the Nizam culture and create a 'Mini India,' if BJP comes to power.

Addressing a press conference after participating at a roadshow at Warasiguda in Secunderabad on the last day of campaigning for the December 1 Greater Hyderabad Municipal Corporation (GHMC) elections here, Shah said that his party was not fighting to increase its seats, but the Mayor of the Corporation will be from the saffron party.

'We will put an end to the dynastic politics in the state. We will bring good governance to Hyderabad and take steps for transforming it into a world-class IT hub,' Shah promised.

'We want to build Hyderabad into a modern city by freeing it from Nizam culture,' he said, while thanking the people of Hyderabad for showing immense support to BJP.

The Union Minister said that if BJP wins the polls, all the illegal encroachments on 'Nalas' and lakes would be removed.

He said alliances between political parties were common, but why the ruling Telangana Rashtra Samithi has a secret alliance with the Majlis-e-Ittehadul Muslimeen (MIM).

Unlike the TRS, BJP fulfills the promises it makes to the people, said Shah, adding that corruption would also end, if BJP was voted to power.

Denying the TRS charge that the Centre did not extend flood assistance, the Union Minister said the Centre had given Rs 500 crore twice for the purpose.

Stating that the KCR-led TRS government was not implementing Central schemes like Ayushman Bharat for political purposes, Mr Shah said the Centre had extended assistance for the construction of 1.30 lakh houses for the poor. The Chief Minister would know about the Central assistance figures, if the latter attended the Secretariat, remarked the Union Minister.

Earlier, soon after landing at Begumet airport by a special flight, Shah drove straight to the Bhagyalakshmi temple, abutting the historic Charminar here, where he offered special pooja, before participating in a roadshow.