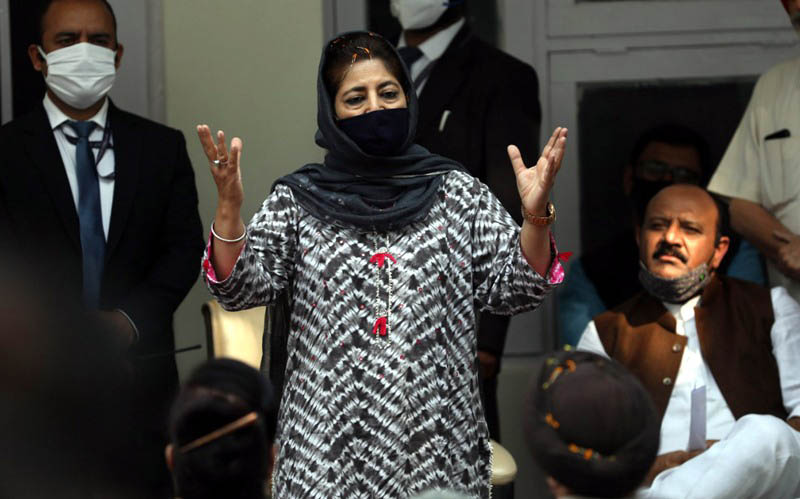 Srinagar/UNI: Former Jammu and Kashmir Chief Minister and Peoples Democratic Party (PDP) president Mehbooba Mufti and her daughter Iltija Mufti were on Friday placed under house arrest at their Gupkar residence in the summer capital, Srinagar.

Mehbooba said that she has been yet again "illegally" detained and not allowed to meet the family of Waheed-ur-Rehman Parra in south Kashmir district of Pulwama.

"Iltija was also placed under house arrest as she wanted to visit Parra’s family," she added.

Parra, a PDP youth leader, was arrested by the National Investigation Agency (NIA) on Wednesday for allegedly supporting militants.

The former Chief Minister alleged that "BJP ministers and their puppets are allowed to move around in every corner of Kashmir but security is a problem only in her case".

A security force vehicle has been parked in front of the main gate of the Gupkar residence of Mehbooba, who was released in October this year after remaining under detention for 14 months since Aug 5, 2019, when the Centre abrogated Article 370 and Article 35A.

Meanwhile, reacting to the development, former Chief Minister and National Conference (NC) vice president Omar Abdullah alleged that personal liberty is treated as a favour by the government, to give and withdraw at will, with no interference from the judiciary.

"Parking a truck in front of our gates is now standard operating procedure for this admin," he added.

PDP spokesperson Tahir Sayeed told reporters outside the residence of Mehbooba that the former Chief Minister was placed under house arrest and even the party workers were not allowed to go inside the residence and meet her.

"I've been illegally detained yet again. Since two days, the Jammu and Kashmir admin has refused to allow me to visit Para Wahid’s family in Pulwama. BJP Ministers & their puppets are allowed to move around in every corner of Kashmir but security is a problem only in my case," Mehbooba wrote on micro-blogging site twitter.

"Their cruelty knows no bounds. Waheed was arrested on baseless charges & I am not allowed to even console his family. Even my daughter Iltija has been placed under house arrest because she also wanted to visit Waheed’s family," she added.

She also posed letters from SSG, asking for rescheduling of her tour to Pulwama district in view of security concerns.

"I'm going to hold a press conference at 3:00 pm today and will brief the press on various issues. Request media to kindly come," she tweeted.