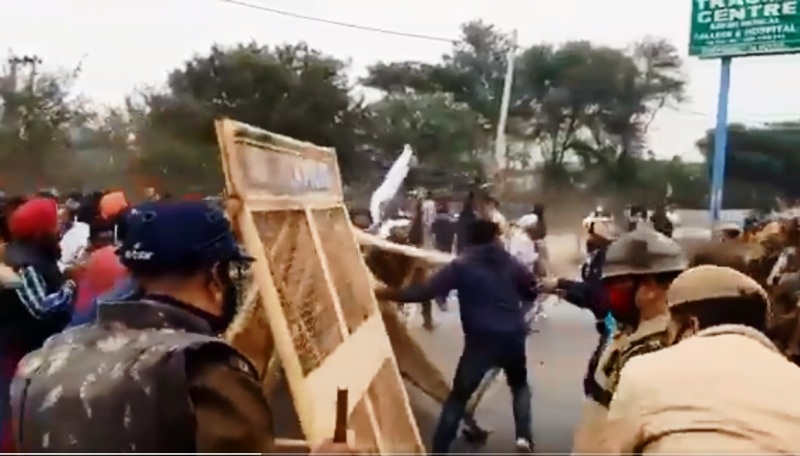 New Delhi/IBNS: More than 50,000 farmers are expected to stand at the Delhi border on Thursday night as they march towards the national capital to protest against the Centre's new farm laws.

"More than 50,000 farmers will be standing at the Delhi border by today evening.  The numbers are expected to swell through the night as thousands of tractors and trolleys are carrying farmers, women and children from interior areas of Punjab," read a statement from Samyukt Kisan Morcha and All India Kisan Sangharsh Coordination Committee.

The day witnessed massive clashes between the farmers and the Haryana Police as the protesters were attempting to enter the state from Punjab.

In a dramatic visual, farmers from Punjab were seen throwing police barricades into the river as they were attempting to enter Haryana.

Police were forced to use tear gas and water cannons at the farmers.

Meanwhile, leaders in Punjab and Haryana too engaged in a political tussle, with the BJP accusing the Congress of brainwashing farmers for its own interests and the Congress hitting back with sharp questions.

Strongly condemning Haryana government's forcible attempts to stop farmers from marching to Delhi in protest against the Farm Laws, Punjab Chief Minister Captain Amarinder Singh warned the BJP-led government against pushing them to the brink.

Urging the Manohar Lal Khattar government to allow the agitated farmers to pass through the national highway to take their voice to Delhi peacefully, Singh questioned the need to stop them from proceeding.

Shocked at your response @mlkhattar ji. It's the farmers who've to be convinced on MSP, not me. You should've tried to talk to them before their #DilliChalo. And if you think I’m inciting farmers then why are Haryana farmers also marching to Delhi?

"Why is @mlkhattar govt in Haryana stopping the farmers from moving to Delhi? The tyrannical use of brute force against peacefully protesting farmers is totally undemocratic & unconstitutional," he said, asserting that “the hands that feed the nation deserve to be held, not pushed aside."

As for endangering lives during #COVID19, have you forgotten that it was @BJP4India led central govt that pushed through those #FarmLaws amid the pandemic, uncaring about the impact they'd have on our farmers? Why didn't you speak out then @mlkhattar ji

Terming it a “sad irony” that on Constitution Day, Singh said the constitutional right of farmers to protest was being suppressed.

It’s a sad irony that on #ConstitutionDay2020 the constitutional right of farmers is being oppressed in this manner. Let them pass @mlkhattar ji, don't push them to the brink. Let them take their voice to Delhi peacefully. pic.twitter.com/48P0rvILVU

The Chief Minister flayed the use of brute force by the Haryana Police, which had used water cannons and tear gas in a bid to stop the Punjab farmers from marching through the state and had not allowed farmers from Haryana to move out of their villages in many places.

What was the need for violence, Singh asked, pointing out that the farmers had been protesting for the past two months in Punjab without any problem, even though the state had suffered crores of rupees in losses.

There had been no violence or law and order problem in Punjab, he observed, terming the Haryana government’s actions as provocative.

"For nearly two months farmers have been protesting peacefully in Punjab without any problem. Why is Haryana govt provoking them by resorting to force? Don't the farmers have the right to pass peacefully through a public highway?" he asked.

For nearly 2 months farmers have been protesting peacefully in Punjab without any problem. Why is Haryana govt provoking them by resorting to force? Don't the farmers have the right to pass peacefully through a public highway? @mlkhattar pic.twitter.com/NWyFwqOXEu

The protest, planned for over two months, has the support of 500 farmers' organisations.

The agitating farmers have not even responded to Agriculture Minister Narendra Singh Tomar's appeal for talks on Dec 3.