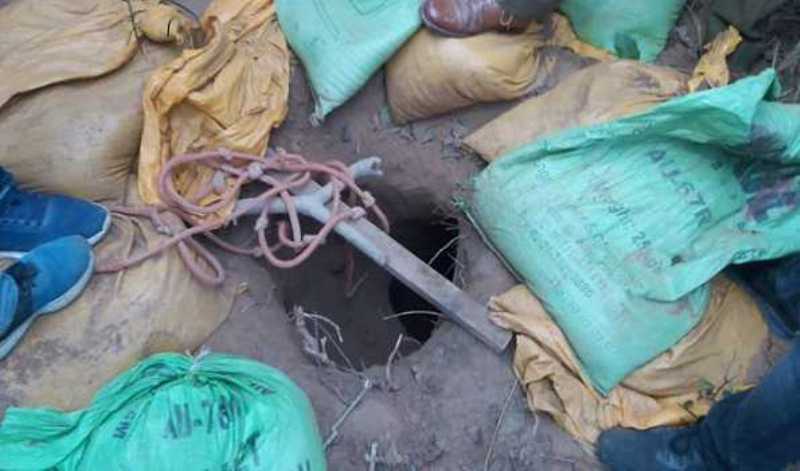 Jammu/UNI: A senior BSF official on Sunday said that the role of Pakistan cannot be denied as without their involvement, the tunnel cannot be dug along the International Border.

The BSF, along with J&K Police, in a joint search operation have detected a 150-meter long tunnel in the Regal village of Samba sector of Jammu region.

“The role of Pakistan cannot be denied as without their consent, the tunnel is impossible,” N S Jamwal, Inspector General BSF told reporters here at the tunnel site.

He said the BSF and Police along with intelligence agencies were on the job to crack the route of infiltration and finally on Sunday, the runnel was found.

“It is a fresh tunnel and has never been used earlier for infiltration,” said the BSF Officer adding, “it seems terrorists involved in Nagrotra encounter used this 150 metre long tunnel to infiltrate,” said the IG adding, “we believe they had a guide who took them till highway.”

A joint team of BSF and J&K Police detected a tunnel originating from Pakistan side of IB and exiting into Indian side in the area of BOP Regal, District Samba, Jammu about 150 metres from IB, 70 metre from border fencing with 25 metre depth.

“It appears that proper engineering effort has gone in making the tunnel indicating the nefarious hand of the establishment in abetting terrorist activities. The nearest Pakistan BOPs are – Chak Bhura, Rajab Sahid and Asif Sahid,” Mr Jamwal added.

He said that the exit was in thick bushes carefully concealed and meticulously covered with soil and wild growth.

“The mouth of the tunnel is strengthened and reinforced by the sand bags with markings of Karachi, Pakistan. It is a freshly dug tunnel and appears to be used for the first time,” he added and said that a special team was formed under an officer tasked to conduct a detailed search, subsequent to which by first light the tunnel was detected by BSF along with J&K police.

Earlier, Dilbag Singh, Jammu and Kashmir, Director General of Police, who was also present on the spot, said, “after Nagrota encounter near Ban Toll in which four Pakistani terrorists were killed and huge cache of arms and ammunition was recovered, many questions were raised on infiltration especially how they reached in the national highway?”

He said that after developing intelligence inputs, a search operation was carried out along the border and the tunnel was detected, which is just a few meters away from Pakistan.

“The opening of the tunnel is towards the Pakistan side and the terrorists have used this route to infiltrate,” the J&K Police Chief said.

“Based on leads available consequent to the encounter on Nov 19, with militants and joint team of J&K police, Army and CRPF at Ban Toll near Nagrota, District Jammu, it was learnt that militants were picked up by a truck from Village Jatwal in District Samba on the National Highway,” he added.

The DGP was also accompanied by the IGP Jammu Mukesh Singh to investigate the matter.