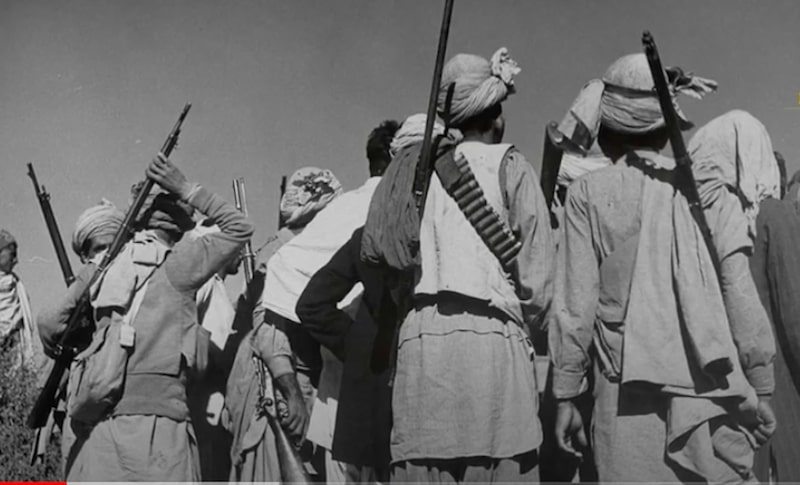 Pakistan’s invasion of Kashmir was darkest hour in history of Jammu and Kashmir, feel experts

Srinagar: Pakistan has weaved a false narrative surrounding the events following the invasion of Kashmir in 1947 and many people around the world  unfortunately believed that, according to speakers at a webinar titled 'Pakistan’s Invasion of Kashmir (22nd Oct. 1947): Darkest Hour in the History of Jammu and Kashmir'.

Organised by Usanas Foundation, the webinar was on the Pakistan backed tribal invasion of Jammu and Kashmir just a little over two months after India attained independence.

The speakers during the seminar focused on the false narrative that has been propagated surrounding the events following the invasion and how people around the world still unfortunately believe the false narrative spread by Pakistan in order to make itself look like a messiah while in reality they were ‘murderers’.

The speakers also delved into the current situation in Jammu and Kashmir.

Raiders from Pakistan continue to infiltrate into Kashmir and attempt to perpetrate untold violence.

The discussion centered around the Pakistan backed Kabali tribal invasion of Kashmir on 22nd October 1947 which is regarded as one of the darkest times in the history of the valley.

Lt. General Ata Hasnain said: “The story of Kashmir needs to be retold. Today I will try and shed light on what is actually the black day because for years Pakistan has tried to propagate a false narrative and claim that the black day is actually on the 26th of October when the instrument of Accession was signed by the Maharaja of Kashmir.”

“There are similar unflattering labels attributed to 27th of October as well. India is a rather innocent nation, honest and truthful and likes to tell things as we see things, but oftentimes we fail to realize that our neighbors, that those around us are not like us,” he said.

“The falsely create narratives tsuit them and their situation. Due to this, for the last 70 years, the international community has only heard false narratives regarding the events of 22nd October 1947 and India has willingly or unwillingly been unable to correct that perception,” he said.

He said India has believed that the events that happened on 22nd and the days following that were something of history.

“As these false narratives were not addressed during the initial phase, they have become deeply ingrained within the international community,” he said.

“The narrative that has been created is that Kashmir is a Muslim majority region and therefore belongs in Pakistan because it is an Islamic nation. Another false narrative is that India used force and coercion to force the Maharaja to sign the instrument of Accession and then in order to make it look legitimate moved in its troops on the 27th,” he said.

“They further state that India forcefully took over Kashmir and that is why that part of Kashmir is ‘illegitimately’ with India,” he said.

From 1948-72 Pakistan has tried to use force to capture Kashmir and despite that they have claimed that they were the first ones to implement the United Nation resolution regarding Kashmir.

“History has overtaken the UN resolution of 1948-49 because Pakistan has tried to change the narrative by force. While many countries around the world, especially India’s allies, believe the narrative put forward by India, any people around the world do not believe in that narrative. That is why a much more comprehensive attempt must be made to show the world the true narrative of what happened on 22nd October 1947,” he said.

“In actuality this event does not start on 22nd October, it actually began much before. General Akbar Khan in his book ‘Raiders of Kashmir’, stated that preparation and an underlying understanding that there would be conflict in Kashmir was made back in June and possibly even before that. The preparation for the events of the 22nd were already being made much before the actual invasion,” he said. 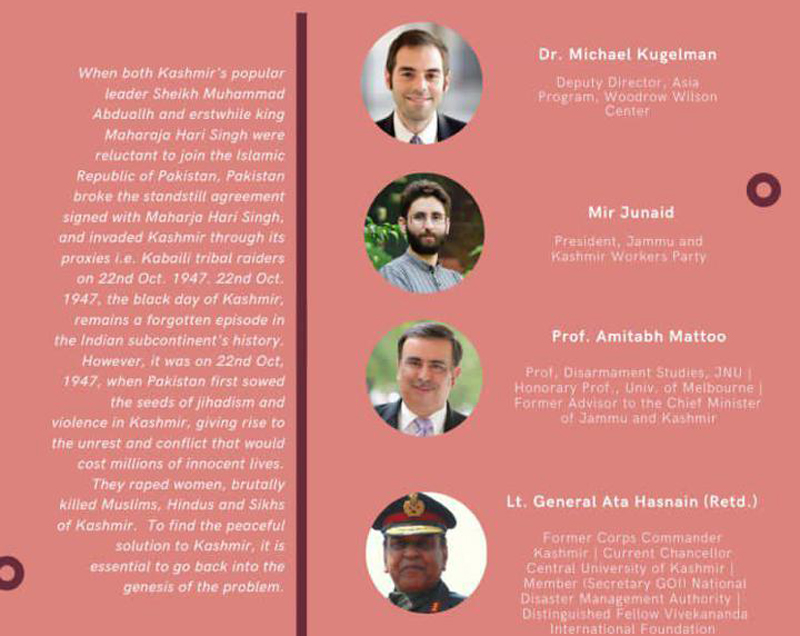 “Th territory of Jammu & Kashmir was of great strategic importance to both India and Pakistan due to its location, connect to Central Asia and China. That is why Pakistan in no way could afford to lose control of Kashmir irrespective of the fact whether it was a Hindu majority region of a Muslim majority region,” he said.

“In addition, Pakistan was also keenly aware that after partition it did not have a standing army and that it would take time to create and establish one, on the other hand India had retained the remnants of the British Indian Army. In order to overcome this barrier, Pakistan decided to harness the existing resources of the tribals and struck a deal with them,” he said.

“This move by Pakistan took India completely by surprise. As per General Akbar’s book, several Lashkar where to advance on strategic roads leading to Srinagar and would enter and block the Banihal pass so as to block India’s access to Kashmir. Multiple other Laskar’s were also deployed on several other strategic locations,” he said.

“Pakistan’s 7th Infantry Division at this time was also kept in reserve and was meant to exploit any early gains that were made by the tribal forces. Pakistan’s plan was highly professional and was coordinated. The tribal used pillage, plunder and rape as a tactic/ instrument in their offensive. The very people that Pakistan claimed to save and protect were subjected to untold horrors and violence,” he said.

“This fact is hardly spoken about and recorded. The rape and plunder of nuns at a convent and the heroic patriotism of Maqbool Shervani is hardly talked about today,” he said.

“The Maharaja’s small number of troops put forward a valiant effort to fight the tribal invaders but faced with dismal odds the Maharaja took the decision to sign the instrument of Accession and then Indian forces were brought in on 27th of October,” he said.

“After several great battles, a ceasefire was finally reached after a year. Many people question behind the reasoning behind the ceasefire, many believe that all of Kashmir should have been taken,” he said.

Hasnain said Pakistan committed tremendous atrocities on the people they claimed to have wanted to save.

“A set of lies has been told to people and many people unfortunately believe this lie,” he said.

Professor Amitabh Mattoo said: “We will try to delve deeper into the aspect of civilian resistance to the Kabali tribal raid of Kashmir that was aided and supported by Pakistan. Before the Indian Army landed in Kashmir, volunteers from the Kashmiri civil society passionately, voluntarily and devoid of materialistic incentive trained themselves in the use of firearms in order to resist the invading tribals.”

“Men, women and even teenagers took up arms against the Pakistan aided invaders. This civil resistance prevented an onslaught on Srinagar, in the absence of these patriotic fighters, Srinagar would have suffered much greater damage on par with other regions of Kashmir,” he said.

“Many of those who fought and died, including 19-year-old Maqbool Sherwani remain unsung. The residency road in Srinagar was once upon a time know after Sherwani but is no longer referred to as such but is referred to as the ‘British residency’ road. Sherwani’s life and legacy, as well as his ideals must be mainstreamed throughout the country,” he said.

“Every part of India should carry a chapter on the life of Maqbool Sherwani because this is the history that everyone in India should grow up with, the frontline of resistance against the Pakistani tribal invaders were Kashmiris. Sherwani, through guile, false rumors and Kashmiri charm managed to singlehandedly delay the Pakistani backed tribals,” the professor said..

“Due to his actions he was tortured and crucified. Before the invasion, Shervani even disrupted Jinnah’s speech in Srinagar before the invasion. As per eye witness accounts, Sherwani before his death cried out ‘victory for the unity of Sikhs, Hindus and Muslims’,” he said. 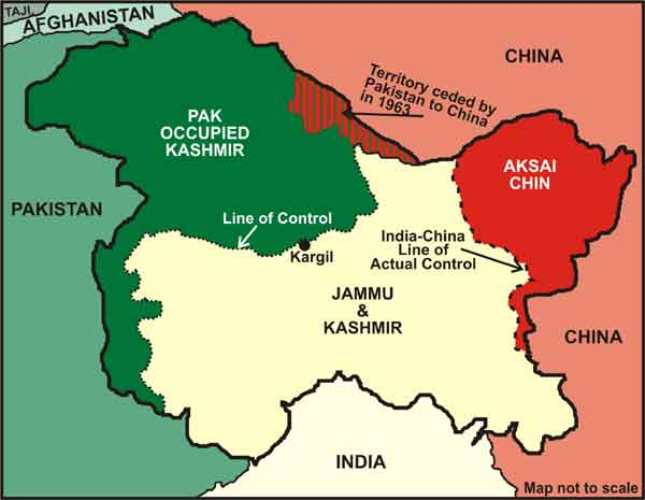 He said Mahatma Gandhi has also referred to Sherwani and stated that his martyrdom would make anyone proud.

“His legend and story is unfortunately forgotten, his ideals closely represented those of India.  It’s important that the tales and actions of Local heroes who resisted the Pakistan backed tribals be part of any narrative that India decides to push forward in order to show that the Kashmiris themselves were the first to take up arms against the invaders,” he said.

Kashmiri politician Mir Junaid said many in the younger generations have forgotten the truth of the events that transpired on 22nd October 1947, therefore discussions such as these are extremely important because the current disputes in Kashmir can be put in a historical context.

“The previous generation of Kashmiris has been destroyed by the false narrative/idea of Azadi that was propagated by Pakistan. The educated section of J&K seems to have turned a blind eye towards the history of J&K. The current generation are a product that was not only a victim to the poisonous narrative spread by Pakistan, this narrative has also destroyed the harmonious nature of the valley,” he said.

“Kashmir was something that Jinnah thought was already in his pocket, but things did not turn out this way as the politics in Kashmir increasingly demanded democracy from the monarch. While the majority of the population was Muslim, the essence of the society was multi-cultural in its core and due to this multi-cultural nature, J&K was naturally suited to join India instead of Pakistan that had already declared itself as an Islamic country. J&K saw a future in the democratic India and if things had progressed naturally, J&K would have joined India,” he said.

The Kashmiri politician said the Tribal attack on Kashmir on 22nd October was something that Pakistan did not want to be formally linked too because they would have faced backlash from world powers for its brutal and uncivilized behavior.

“The main point of interest is not the Accession of Kashmir by India, but the Invasion of Kashmir by Pakistan backed tribals. People in India seem to have forgotten the history of Kashmir and Pakistan has been able to use this ignorance to change its image from a murderer to a messiah. The horrors caused by Pakistan on 22nd Oct 1947 has been erased from the minds of Kashmiris that have been used as proxies by Pakistan,” he said.