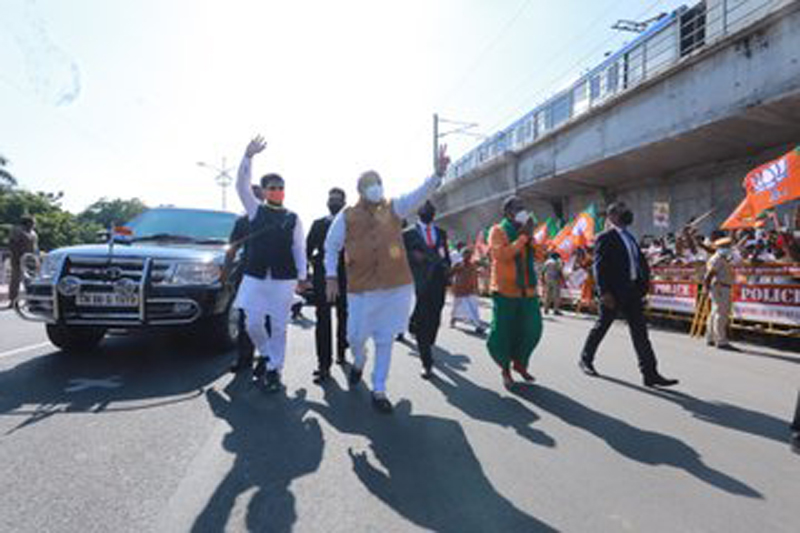 Chennai/UNI: Ahead of the Assembly elections, which is due in 4-5 months times, Senior BJP leader and Union Home Minister Amit Shah arrived here on Saturday on a two-day visit to the city and was accorded a rousing reception at the airport.

The BJP's shrewd strategist, who was instrumental in NDA success in the recent Bihar polls, is keen on replicating it in Tamil Nadu, where the BJP would use his visit to gain a strong foothold in the southern state and make a mark in the elections.

Shah was accorded rousing reception both by the AIADMK and BJP cadres.

Since it was his first visit to the city after Murugan took over as the Party Chief, BJP leaders arranged special reception all along the route from the airport to a star hotel where he would be staying.

Roads in front of the airport were tastefully decorated and folk artistes performed traditional dances at seven strategic locations leading to the hotel to greet him.

Some more pictures from Chennai. pic.twitter.com/FaUNxAQft5

Shah, who came out of the airport, sprang a surprise and chose to walk on the arterial GST road for about 750 m, waving to the AIADMK and  BJP cadres who had lined up on both sides of the roads to greet him.

At a government function, Shah would dedicate the newly constructed Chennai's fifth reservoir at Thervaikandai in Tiruvallur district and lay the foundation stones for Phase-II of the Chennai Metro Rail project and various infrastructure project at a cost of more than Rs 67,000 crores.

With the BJP maintaining that the alliance with the AIADMK would continue for the polls, Shah was also expected to meet Palaniswami and Panneerselvam to fine tune the alliance strategy.

The issue of the release of seven life convicts in the Rajiv Gandhi assassination case, which was pending before Governor Banwarilal Purohit for more than two years after the State Cabinet recommended their release in September 2018 under Article 161 of the Constitution, was also expected to figure during the discussions.

Later, in the evening he would meet prominent leaders and hold discussions with BJP leaders, office-bearers and district Presidents, besides the Party's core committee, on the strategy to be adopted in the upcoming elections.

He will leave for New Delhi tomorrow morning.