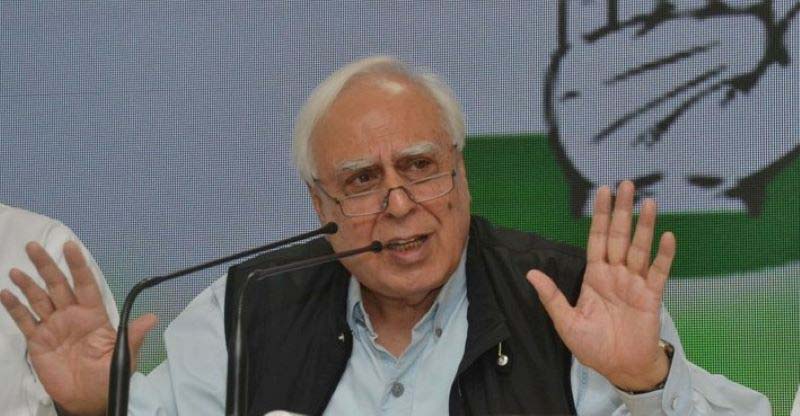 'Time for introspection is over': Kapil Sibal questions Congress leadership

New Delhi/UNI: Questioning the Congress leadership after the party's poor show in the recent Bihar Assembly polls and bypolls, senior party leader Kapil Sibal has said the 'time for introspection is over' for the grand-old-party.

On the Congress' performance in the recent Assembly elections in Bihar and bypolls in Gujarat and Madhya Pradesh, Sibal, in an interview to an English Daily, said, "Where we were an alternative the people of that state have not reposed their confidence in the Congress in the manner expected by us. So the time for introspection is over. We know the answers. The Congress must be brave and willing to recognise them."

"...we need to do several things at several levels — organisationally, articulation in the media in whatever form, putting up people who the people want to listen to, providing an active, thoughtful leadership who can articulate with a lot of circumspection," the senior Congress leader said.

"We must ask ourselves what we are doing wrong and then correct ourselves. To be on a correction course, we must have a conversation with those wedded to the Congress party and experienced enough to contribute. It’s not difficult to do but it requires reaching out both within and without," he said.

On the grand old party's leadership views, Sibal said, "We are yet to hear from the Congress party their views on our recent performance in Bihar and in the by-elections. Maybe they think all is well and that it should be business as usual."

There is a need to discover a new mechanism to reach out to the people, he said.

"The nature of campaigning has changed. There is a problem also structurally… in the sense that the mainstream media is controlled by the ruling party. So we need to discover a new mechanism to reach out to the people. What is that mechanism? That needs to be thought about. We have social media platforms where Congress is doing fairly well. But again that is not producing results on the ground. So what do we have to do to produce results on the ground?" he said.

"We cannot anymore expect people to come to us. We are not the kind of force that we used to be. We need to reach out to others by those who are experienced in this business. But in order to do that we have to have a conversation," the Congress leader said.

"Since there has been no dialogue and there seems to be no effort for dialogue by the leadership and since there is no forum to express my views, I am constrained to express them publicly. I am a Congressman and will remain a Congressman and hope and pray that the Congress provides the alternative to a power structure which has subverted all the values that the nation stands for," the senior Congress leader told the newspaper.