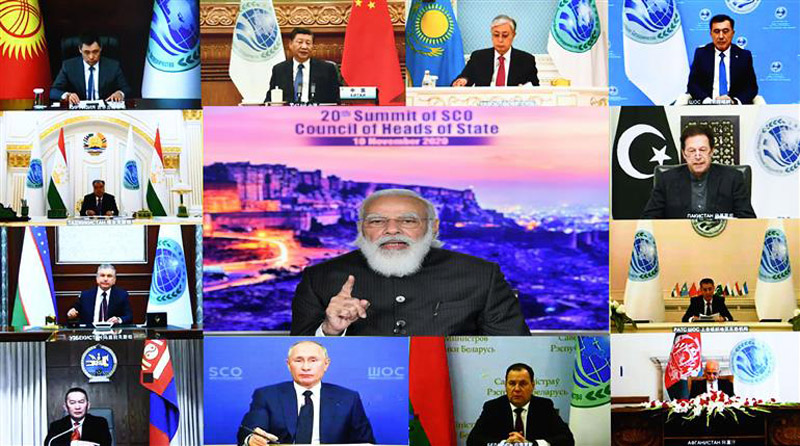 New Delhi: Prime Minister Narendra Modi on Tuesday attended the Summit of SCO Council of Heads of State where he raised voice against terrorism.

He mentioned that India’s brave soldiers participated in about 50 UN peacekeeping missions and India's Pharma industry supplying essential medicines to more than 150 countries during the pandemic.

The Summit of SCO Council of Heads of State was held on November 10.

The Meeting was chaired by the President of the Russian Federation Vladimir Putin.

Other participants were: Secretary General of the SCO Secretariat, Executive Director of the SCO Regional Anti-Terrorist Structure, the Presidents of the four Observers (Afghanistan, Belarus, Iran, Mongolia) of the SCO.

This was the first SCO Summit held in Virtual Format and third meeting that India participated after becoming a full member in 2017.

Prime Minister Narendra Modi in his address to the SCO leaders congratulated President Vladimir Putin for organizing the meeting despite challenges and constraints arising due to the COVID-19 pandemic.

Prime Minister, in his address, highlighted the imperative of a reformed multilateralism to meet the expectation of a world suffering from the social and financial after-effects of the pandemic.

India, as a non-permanent member of the UNSC, beginning from 1 January 2021, will focus on the theme of ‘reformed multilateralism’ to bring about desirable changes in global governance.

He also extended full support to observing the 20th anniversary of SCO in 2021 as the "SCO Year of Culture” and spoke of India’s own initiatives to hold the first SCO exhibition on Shared Buddhist Heritage to be organized by National Museum of India, SCO Food Festival in India next year and the translation of Ten regional language literary works into Russian and Chinese.

Prime Minister expressed India’s readiness to host the next regular Meeting of SCO Council of Heads of Government on November 30, 2020 in virtual format. India has also proposed to set up a Special Working Group on Innovation and Startups and a Sub Group on Traditional Medicine within SCO.

He elaborated on India's vision of a "Aatma Nirbhar Bharat" (Self-reliant India) in the post-pandemic world that could prove to be a force multiplier for the global economy and the economic progress of the SCO region.

Prime Minister congratulated President Emomali Rahmon of the Republic of Tajikistan for assuming the chairmanship of SCO next year and assured full cooperation from India.