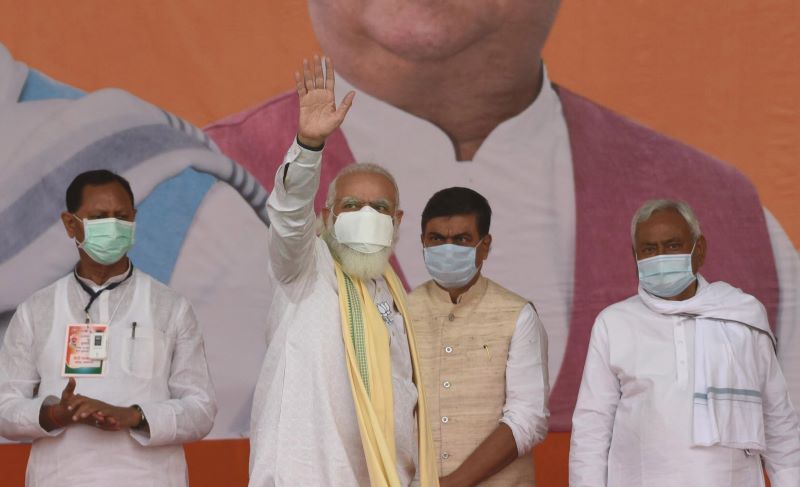 Bihar poll results: NDA set to return to power as per trends

Patna/IBNS: Defeating all exit polls which had predicted a new Bihar Chief Minister, the National Democratic Alliance (NDA), as per the trends so far, is set to return to power with Prime Minister Narendra Modi's Hindu nationalist Bharatiya Janata Party (BJP) emerging as the single largest party.

As per the last update, the ruling coalition is ahead in 126 seats including BJP's 73 and present Chief Minister Nitish Kumar-led Janata Dal (United)'s 47.

Two other NDA allies, Vikassheel Insaan Party (VIP) and Hindustani Awam Morcha (Secular) are ahead in five and one seats respectively.

Though in the early trends in the morning, Mahagathbandhan, which comprises Rashtriya Janata Dal (RJD), Congress and Left parties, was on track to defeat the NDA, the tides turned around in favour of the JD(U)-BJP with the passing of every hour.

Mahagathbandhan, whose CM candidate is RJD leader Tejashwi Yadav, is presently ahead in 106 seats.

The RJD, whose rule earlier under Yadav's father Lalu Prasad Yadav was a dark tale for many for an alleged lawlessness, is ahead in 68 seats.

While Congress has managed to take a lead in just 20 seats, three Left parties have together managed to be ahead in 18 seats.

However, unlike other times, the counting process would take a longer time amid Covid-19 situation as the polling stations have been increased by around 33 thousand, said the Election Commission.

Chandra Bhushan, Deputy Election Commissioner, said, "The speed of counting is not slow. The excess time will be required due to the increase in EVM machines."