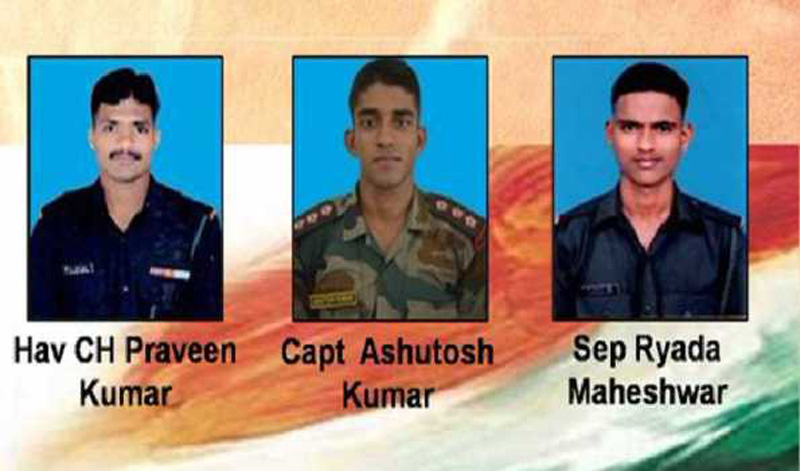 Srinagar/UNI: Troops resumed Cordon and Search Operation (CASO) at Line of Control (LoC) in Machil sector woods in the frontier district of Kupwara, where so far four soldiers, including an officer, and three infiltrators were killed in the exchange of fire which ensued in the wee hours of Sunday.

Meanwhile, Chinar Corps paid rich tributes to --Captain Ashutosh Kumar, Hav Parveen Kumar and RFN Pyada Maheshwar—all from 18 Madras, who made supreme sacrifice during an encounter with militants in Machil sector, where a Border Security Force (BSF) constable was also martyred on Sunday.

Troops from all sides have joined the operation but so far no contact has been established with the militants, they said, adding that only three infiltrators were spotted when they entered this side from Pakistan-occupied-Kashmir (PoK) in the wee hours on Sunday, taking the advantage of darkness.

They said despite difficult terrain coupled with below normal temperature, troops are searching the woods to make sure there are no more militants.

Sources said a large number of militants are waiting at launch pads at LoC in PoK to sneak into this side before the infiltration routes are closed due to snowfall. However, they said, troops guarding the LoC are already on high alert and have intensified foot and night patrolling to foil any infiltration bid.

They said Pak troops are violating ceasefire to help militants to infiltrate into Kashmir valley, where a large number of ultras, including top commanders, were killed in different successful operations while over half a dozen also surrendered during live encounters.