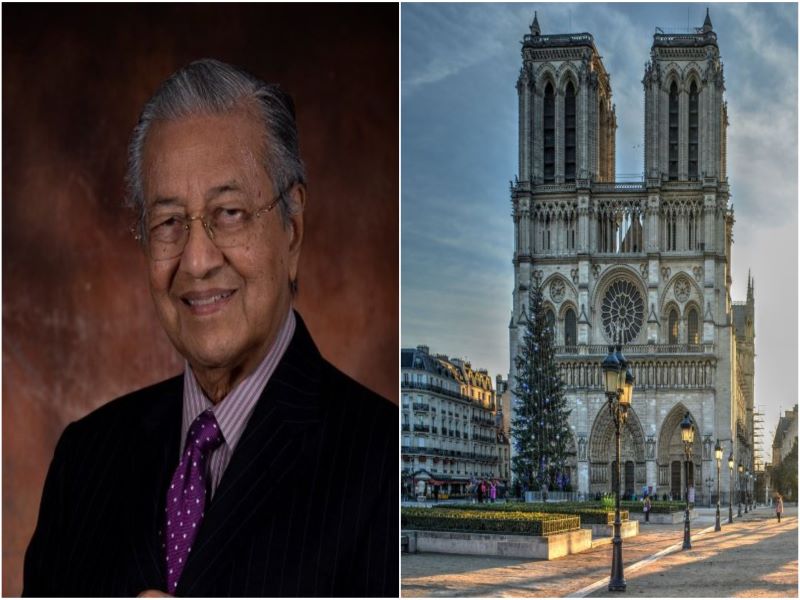 'Suspend Mahathir Mohamad's account or get called out for being an accomplice for formal call for murder': France tells Twitter

Paris/IBNS: France has asked Twitter to suspend former Malaysian Prime Minister Mahathir Mohamad's account following his tweets justifying the killings in the country saying that Muslims "have the right to kill millions of French people" to avenge the past.

"I just spoke with the MD of @TwitterFrance. The account of @chedetofficial must be immediately suspended. If not, @twitter would be an accomplice to a formal call for murder," he tweeted.

I just spoke with the MD of @TwitterFrance. The account of @chedetofficial must be immediately suspended. If not, @twitter would be an accomplice to a formal call for murder.

Twitter tagged the post with a disclaimer stating that the post violated its rules but was being left up for it was in the interest of the public. 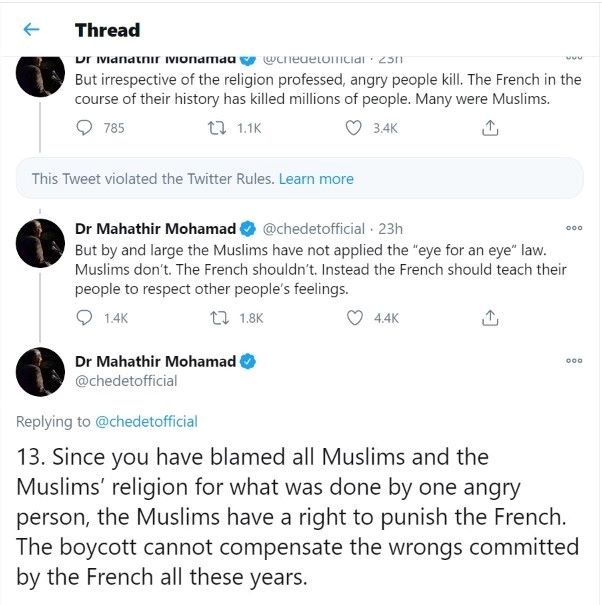 While France is reeling under the recent attacks, including the latest in Nice where three people were killed and several others were injured by a knife-wielding Islamist inside a church on Thursday, the most shocking reaction came from Mahathir when he posted a series of tweets justifying the attacks.

Holding that freedom of speech does not include 'insulting other people' the 95-year-old said. "Irrespective of the religion professed, angry people kill," said Mahathir.

"The French in the course of their history [have] killed millions of people. Many were Muslims."

In a tweet that has since been removed for violating the microblogging site's rules, Mahathir had posted: "Muslims have a right to be angry and to kill millions of French people for the massacres of the past."

He attacked French President Emmanuel Macron for his recent remarks about Islam and said he "is not showing that he is civilised."

"He is very primitive in blaming the religion of Islam and Muslims for the killing of the insulting school teacher. It is not in keeping with the teachings of Islam.

"Since you have blamed all Muslims and the Muslims’ religion for what was done by one angry person, the Muslims have a right to punish the French. The boycott cannot compensate for the wrongs committed by the French all these years.

"But by and large the Muslims have not applied the “eye for an eye” law. Muslims don’t. The French shouldn’t. Instead the French should teach their people to respect other people’s feelings," he tweeted.

"Generally, the west no longer adhere to their own religion. They are Christians in name only. That is their right. But they must not show disrespect for the values of others, for the religion of others. It is a measure of the level of their civilisation to show this respect," he tweeted.

He even attacked the sartorial choice of the women in the West posting: "The dress code of European women at one time was severely restrictive. Apart from the face no part of the body was exposed. But over the years, more and more parts of the body are exposed.  Today a little string covers the most secret place, that’s all. In fact, many in the west are totally naked when on certain beaches."

The attacker in the stabbing incident in Nice was shot and later rushed to a hospital by police.

Nice Mayor Christian Estrosi told reporters that the attackers shouted 'Allahu Akbar' multiple times while he was being nabbed at the scene.

"We have two people killed inside the church … and a third person who was in a bar facing the church where she had taken refuge. Enough is enough … we have to remove this Islamo-fascism from our territory,” the Mayor said.

"Before it was a school professor, this time the Islamo-fascist barbarism chose to attack inside a church. Again, it is very symbolic," he added.

The attack in Nice was followed by a knife attack in France's southeastern city of Avignon and another one in Saudi Arabia at the French Consulate, said media reports.

The attacks come days after a history teacher Samuel Paty, 47, was beheaded for showing cartoons of Prophet Mohammad during a discussion on free speech.