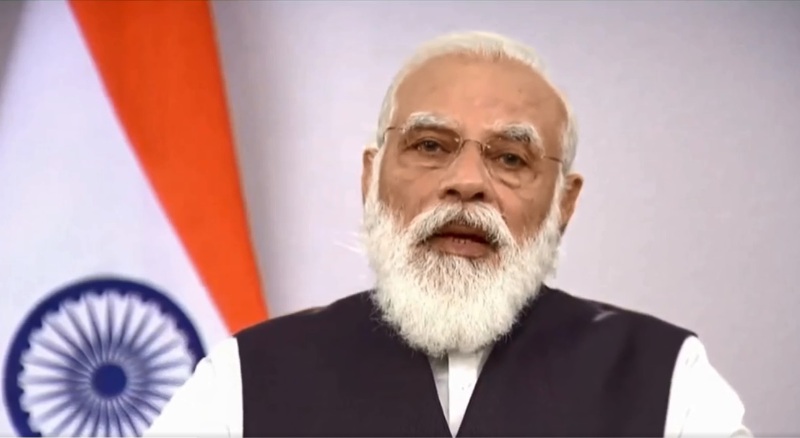 New Delhi/IBNS: In a veiled attack on the Congress party and the Gandhi family Prime Minister Narendra Modi on Tuesday said generational corruption is a major challenge that has been gradually growing in the past decades and has taken a formidable form in the country.

The Prime Minister made the remark while inaugurating the National Conference on Vigilance and Anti Corruption on the theme Vigilant India, Prosperous India on Tuesday through video conferencing.

The event was organized by the Central Bureau of Investigation focusing on Vigilance issues aimed at raising awareness and reaffirming India’s commitment to promotion of integrity and probity in public life through citizen participation.

Addressing the Conference, the Prime Minister said Sardar Patel is the architect of United India as well the country’s administrative systems. As the first home minister of the country, he made efforts to build such a system which is meant for the common man of the country and where the policies are based on integrity.

PM Modi lamented that the following decades witnessed a different situation which lead to scams worth thousands of crores of rupees, establishment of shell companies, tax harassment and tax evasion,

The Prime Minister said in 2014 when the country decided to make a major change and to move in a new direction, there was a big challenge in changing this environment.

Addressing the National Conference on Vigilance and Anti-Corruption. https://t.co/hv08JEKCuh

He added the constitution of the committee against black money was in limbo despite the Supreme Court’s directions.

He said based on these reforms, the nation is now moving ahead with its  full strength to make the AtmaNirbhar Bharat campaign successful. He envisioned making India one of the leading countries of the world.

The Prime Minister stressed the necessity for the administrative systems to be transparent, responsible, accountable, answerable to the public.

He added that the biggest enemy against this is any form of corruption. He said one hand corruption hurts the development of the country and on the other it destroys the social balance as well as the trust that people should have in the system.

He said hence there is a need for systematic checks, effective audits, and capacity building and training with a holistic approach to fight corruption.

The Prime Minister emphasized that it is the need of the hour that all agencies work with synergy and a cooperative spirit.

The Prime Minister recalled what he said during the 2016 Vigilance awareness program that corruption does not have even an iota of  place in our country which is fighting poverty.

He said that for decades, the poor did not get their entitlements but now owing to the DBT the poor are directly receiving their benefits. He said owing to  DBT alone more than Rs 1.7 lakh crore are being saved from getting into wrong hands.

He expressed satisfaction that peoples faith in the institutions is being restored again.

He stressed that there should be neither any strong interference from the government nor an absence of Govt. Government's role should be limited to the extent that is needed. People should not feel that the Govt is unnecessarily interfering or that the govt is not acting when needed.

Modi said that over the last few years more than 1500 laws have been abolished and many rules simplified. He said that many applications for pension, scholarship, passport, startup, etc. have been made online to reduce the hassle to the common people.

He said earlier there was a nefarious industry to lobby for transfer & postings. Now the government has taken many policy decisions, has shown the will to change this situation and the lobbying for appointments to higher posts has ended.

The Government has abolished the interview for the post of Group B & C.

He said the formation of the Bank Board Bureau, has ensured the transparency in appointments to senior positions in banks.

The Prime Minister said many legal reforms were undertaken and new laws introduced to strengthen the vigilance system of the country.

He said the priority of the government has been to provide better technology, capacity building, latest infrastructure and equipment to agencies related to vigilance so that they can work more effectively and deliver better results.

The Prime Minister stressed that this campaign against corruption is not just a one-day or just a one-week affair.

He said when a generation of corrupt people does not get the right punishment, then the second generation commits corruption with more vigour.

Modi said, due to this, it became part of political tradition in many states. He said, this corruption and dynasty of corruption from generation to generation makes the country hollow.

He said this situation is a major hurdle in the development of the country, for a prosperous India and a self reliant India.

The Prime Minister urged to pay attention to the corruption-related news. He said when examples of strong timely action against corruption are shown prominently it would increase the trust of the people and sends a message that it is difficult for the corrupt to escape.

He said that the country gets strengthened if it can defeat corruption and achieve the dream of Sardar Patel by making India prosperous and self reliant.