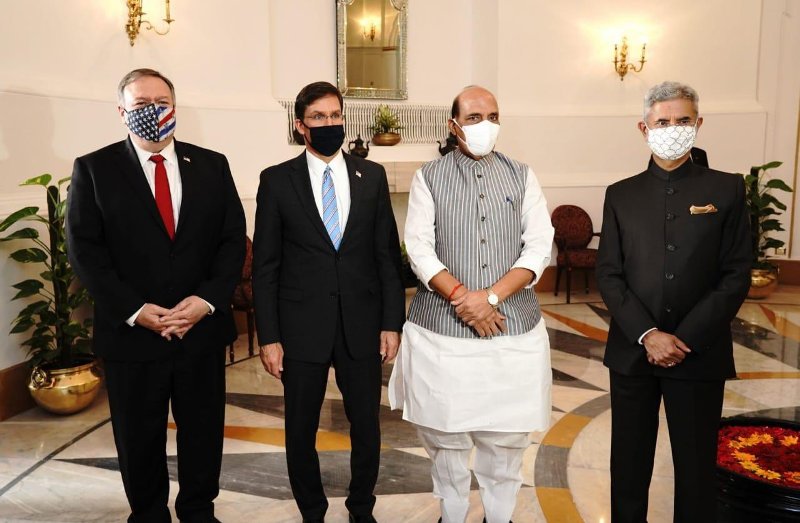 The two nations welcomed the elevation of the U.S.-India Comprehensive Global Strategic Partnership, which is vital to security and stability in the region and the world.

During the meeting, Secretary Pompeo reaffirmed the increasingly close U.S.-India relationship and the shared goals among like-minded Indo-Pacific countries for regional security and prosperity.

The two nations welcomed the second Quad meeting, held at the Foreign Minister level on Oct 6, and looked forward to closing collaboration during India’s upcoming term on the U.N. Security Council.

Bilateral, regional and global issues of mutual interest will be on the agenda. pic.twitter.com/WyGTnfM5Ay

They welcomed an initiative to collaborate through an International Center of Excellence in Research focused on infectious diseases, including COVID-19 and other emerging threats.

They looked forward to an overarching Memorandum of Understanding to enhance health cooperation.

Secretary Pompeo and his counterparts also discussed increased cooperation on energy, space, sustainable financing for infrastructure development, cybersecurity, and counterterrorism, and looked forward to new collaboration in those areas.

The two sides reaffirmed the close bonds between our people and welcomed the inaugural Parliamentary exchange later this year.

The Secretary and his counterparts also discussed ways to advance the 21st century defense partnership.

They welcomed increased cooperation between the U.S. and Indian militaries by expanding information-sharing, defense trade, joint service coordination, and interoperability.

Both sides welcomed the conclusion of the Basic Exchange and Cooperation Agreement to expand geospatial information sharing between our armed forces and committed to the exchange of additional liaison officers.

On behalf of the United States, Secretary Pompeo and Secretary Esper extended an invitation to their Indian counterparts for the next U.S.-India 2+2 Ministerial Dialogue, to be hosted in Washington, D.C.

The leaders looked forward to another year of close cooperation between our countries to further advance the U.S.-India Comprehensive Global Strategic Partnership.