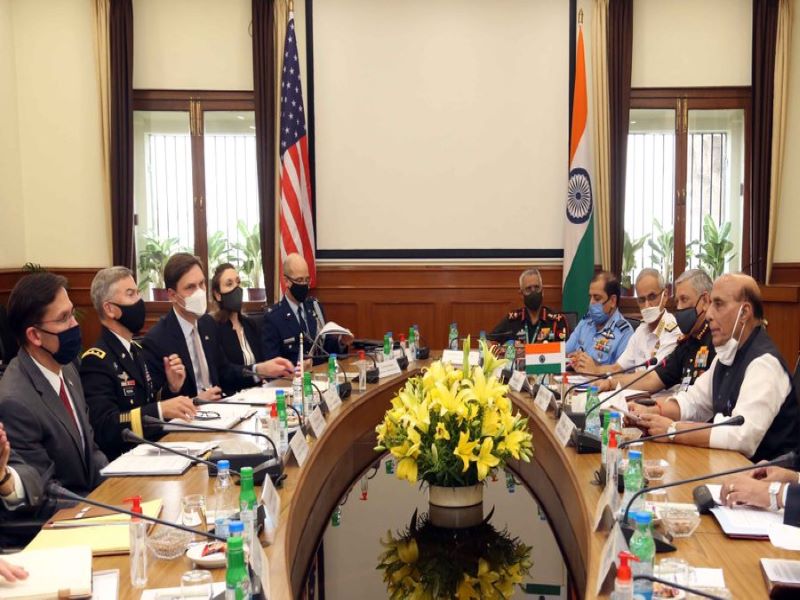 New Delhi/UNI: A day ahead of India-US 2+2 ministerial dialogue, Defence Minister Rajnath Singh on Monday met his U.S counterpart Mark T Esper here on Monday and held discussions on ways to further deepening of defence ties between the two countries.

“India is delighted to host the US Secretary of Defence, Dr. Mark Esper. Our talks today were fruitful, aimed at further deepening defence cooperation in a wide range of areas. Today’s discussions will add new vigour to India-US defence relations & mutual cooperation. @EsperDoD,” Singh said in a tweet.

India is delighted to host the US Secretary of Defence, Dr. Mark Esper. Our talks today were fruitful, aimed at further deepening defence cooperation in a wide range of areas.

The two countries have finalised Basic Exchange and Cooperation Agreement (BECA) agreement to further boost bilateral defence ties and will be signed on Tuesday, sources in the defence ministry said here on Monday.

BECA will allow India to use US’ geospatial data to target enemy military assets with greater accuracy.US Secretary of State Mike Pompeo and Mr Esper arrived here this afternoon on a two-day visit for the third edition of Indo-US 2+2 ministerial dialogue.

The Indian side at the 2+2 dialogue will be led by Defence Minister Rajnath Singh and External Affairs Minister S Jaishankar.

The talks are taking place at a time India is engaged in a bitter border row with China, and the issue is expected to figure in the deliberations.

The US Defence Secretary was given a tri-services guard of honour outside the South Block in the Raisina Hills ahead of his talks with Singh.

In the last few months, the US has been very critical of China over a range of contentious issues including the border row with India, its military assertiveness in the South China Sea and the way Beijing handled the anti-government protests in Hong Kong.

Ahead of Pompeo's visit, the US State Department said the US welcomes India's emergence as a leading regional and global power.

"The United States looks forward to collaborating closely with India during its upcoming term on the UN Security Council, the State Department said. It is expected that the two sides may finalise the long-pending BECA (Basic Exchange and Cooperation Agreement) agreement to further boost bilateral defence ties.

"The BECA will provide for sharing of high-end military technology, logistics and geospatial maps between the two countries."

The Indo-US defence ties have been on an upswing in the last few years.

The first edition of the 2+2 ministerial was held in Delhi in September 2018 after the mechanism was approved by Prime Minister Narendra Modi and US President Donald Trump.

The second edition of the dialogue took place in Washington in December last year.