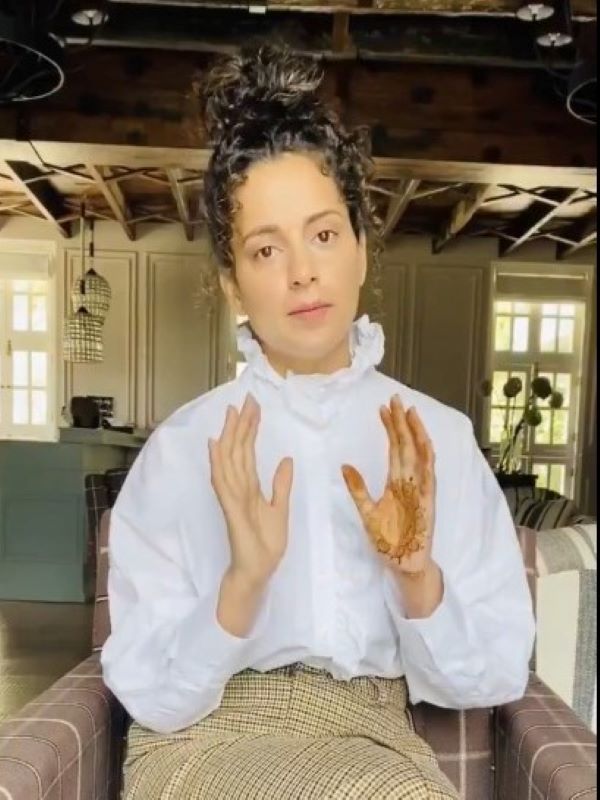 Without naming her, Thackeray on Sunday trained guns on "those who abuse Mumbai by calling it Pakistan Occupied Kashmir".

It is to be recalled Kangana had elicited Sena's ire by comparing Mumbai with Pakistan Occupied Kashmir while continually criticizing the handling of Sushant Singh Rajput's murder case by Mumbai Police.

The Maharashtra Chief Minister said that those who have no livelihood in their home state come to Mumbai and betray it.

"People who have no means of livelihood in their home come to Mumbai and betray it. Calling Mumbai PoK is in fact the failure of Prime Minister Narendra Modi. He had said he would get back PoK into India," Thackeray said, reported NDTV.

He added that "Maharashtra-haters" had left no stone unturned in defaming the state, the report stated.

"Mumbai is PoK, there are drug addicts everywhere - they are painting such a picture. They don't know in our house we grow tulsi, not ganja (marijuana). Ganja fields are in your state, you know where, not in our Maharashtra," he was quoted in the report.

In response to Thackeray's barbs, Kangana said she was not drunk on her father's power and it was Thackeray who was the worse product of nepotism.

"(Sanjay) Raut called me Haramkhor now Uddhav (Thackeray) dubbed me namak-haram (taritor), he is claiming I woudn't be able to make a livelihood in my state if Mumbai does not give me shelter, shame on you I am your son's age this is how you speak to a self made single woman, Chief Minister you are the worse product of nepotism," the actor said.

"Chief Minister I am not drunk on my father's power and wealth like you, if I wanted to be a nepotism product I could have stayed back in Himachal, I hail from a renowned family, I didn't want to live off on their wealth and favours, some people have self respect and self worth (sic)," Kangana Ranaut said, reported NDTV.

You being a leader having such a vengeful, myopic and ill informed views about a state which has has been the abode of Lord Shiva and Maa Parvati along with many great saints like Markandya and Manu Rishi, Pandavas spent large part of their exile in Himachal Pardesh.. cont

Look at the audacity of a working CM he is dividing the country who has made him Maharashtra ka thekedaar? He is just a public servant there was someone else before him soon he will be out someone else will come to serve the state, why is he behaving like he owns Maharashtra?

Just how beauty of Himalayas belongs to every Indian, opportunities that Mumbai offers too belongs to each one of us, both are my homes, Uddhav Thackeray don’t you dare to snatch our democratic rights and divide us, your filthy speeches are a vulgar display of your incompetence..

The verbal battle began after the 33-year-old actor accused Uddhav Thackeray's Shiv Sena of targetting her in a series of arguments over actor Sushant Singh Rajput's death.

Last month, Kangana had lashed out at the Chief Minister in a video message addressing him as "tu" (informal version of you in Hindi).

Thackeray and his party were further rattled after Kangana met Maharashtra Governor Bhagat Singh Koshyari and was accorded Y-plus category of CRPF security by the Ministry of Home Affairs (MHA) in the wake of her spat with Shiv Sena leader Sanjay Raut, and after she said she feared for her life.