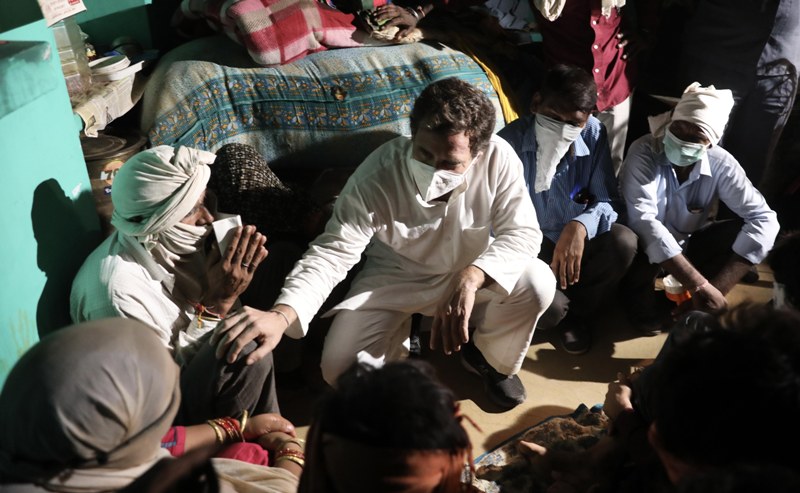 New Delhi/UNI: Hitting out at the BJP for attacking him and the Congress on the incident of rape in Hoshiarpur in Punjab, Congress leader Rahul Gandhi on Saturday said that unlike the government of Uttar Pradesh, governments in Rajasthan and Punjab did not deny the rape incidents nor did they block the course of justice.

In a post on social media,  Rahul,  responding to senior BJP leader and Finance Minister Nirmala Sitharaman questioning his silence in the Hoshiarpur rape incident, said, ''Unlike in UP, the governments of Punjab and Rajasthan are NOT denying that the girl was raped, threatening her family and blocking the course of justice.

If they do, I will go there to fight for justice,''

Unlike in UP, the governments of Punjab and Rajasthan are NOT denying that the girl was raped, threatening her family and blocking the course of justice.

If they do, I will go there to fight for justice. #Hathras

Earlier on Saturday, senior BJP leader and Finance Minister Nirmala Sitharaman, addressing a press conference at the BJP headquarters, questioned the silence of Rahul Gandhi on the rape incident in Hoshiarpur.

''Not a word from the tweet-friendly leader  Rahul Gandhi on the incident in Hoshiarpur.  No tweets on this, no outrage on this, and no picnic on this. A woman heads the party.

In the Hathras rape case, it seemed as though they were all going out for a picnic. The brother and sister (Rahul Gandhi and Priyanka Gandhi Vadra) ran towards the village. But why not in the case of Hoshiarpur or Rajasthan? The selective outrage of the party has been completely exposed. Does this selective outrage suit the Congress party? At least 35 MPs were flamboyant in their statements on Twitter in the case of Hathras. Where are those 35 MPs today?''she said.

Rahul and the Congress party have been strongly attacking the Uttar Pradesh government and the Centre on the Hathras gangrape case.

Meanwhile, addressing a press conference here, Congress spokesperson and All India Mahila Congress President Sushmita Dev said Finance Minister Nirmala Sitharaman instead of saying  something about the economic condition of the country, raised this rape incident and tried to politicise the issue.

She alleged that the Union Ministers Prakash Javadekar and Dr Harsh Vardhan also raised this issue to derive political benefits from it.

Expressing surprise over the statements of the Union Ministers, Dev said that three Union ministers have not spoken a word yet on the Hathras rape incident in September but raised the Hoshiarpur incident in three different press conferences in a bid to gain political mileage in the Bihar assembly elections.

Describing it as disgusting, the Mahila Congress President said that the Punjab government is very cautious about this incident and unlike the Uttar Pradesh government is not working to suppress the rape incident and harass the victims.

Trashing Bharatiya Janata Party (BJP) senior leadership’s attack on his government as well as the Gandhis over the Hoshiarpur rape-murder case, Punjab Chief Minister Captain Amarinder Singh on Saturday termed the remarks of Union Ministers Nirmala Sitharaman and Prakash Javadekar as political puffery, with no substance or basis to support their criticism.

Contrary to what these leaders were claiming, there was no comparison between the Hoshiarpur and the Hathras cases, said Captain Amarinder, pointing out in the latter instance, the Uttar Pradesh government and police did not only fail to initiate stern action but in fact was seemingly trying to cover up the matter to benefit the upper-caste accused.

This, he said, was in sharp contrast to the prompt action taken by the Punjab Police, who immediately arrested the accused and were now preparing to file the challan within a week.

He himself had directed the DGP to ensure that the case is fast-tracked by the courts to ensure strict and exemplary action for the accused, said the Chief Minister.

Ridiculing the BJP leaders’ criticism of the so-called silence of the Congress leadership on the Hoshiarpur case, Captain Amarinder pointed out that his party had been forces to speak up and protest in the Hathras case because the state had failed to get justice for the Dalit girl there.

“Had the BJP government in UP responded as effectively and speedily as we did in Punjab, neither the Congress and the Gandhis, nor scores of NGOs, lawyers, human rights activists would have been forced to take to the streets to fight for the victim,” he added.