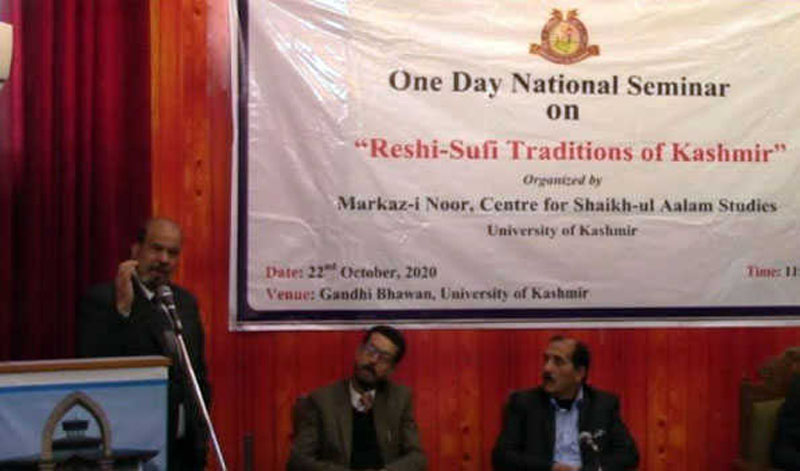 Srinagar/UNI:  Chairman Kashmir Society and former bureaucrat Khawja Farooq Renzushah emphasized the need to revive the 700 years of composite culture which had shaped the Kashmir as a proud civilization of world.

Speaking after presenting a research paper at a National Seminar on “ Reshi-Sufi traditions of Kashmir” organised by Markaz-e-Noor of Hazzrat Sheikh-ul=Aalam chair, Kashmir University (KU) Renzushah said all religious streams may join and merge in unified “Spiritual Tasawuf”.

In his Research paper, Renzushah emphasised that 700 years of composite culture which had shaped our Kashmir as a proud Civilization of world, need to be revived.

All religious streams which believe in peace and love need not to adopt confrontational paths but converge their thoughts in unified Spiritual Tasawuf.

He said hate streams have destroyed the composite culture of Kashmir.

The observation of Lt Governor that steps will be taken to repair all damages caused to Sufi culture in Kashmir since decades because of administrative apathy during the last several decades. Renzushah said the commitment made by Lt Governor that Markaz Noor will not face any dearth of funds to publish literature and verses of all Sufi personalities of Kashmir belonging to the last several decades is encouraging for the majority of people of Aitqaad.

He hoped that now it is possible that literature of Sufiyat of the last 700 years will be translated in several languages so that people all around the globe come to know the importance of such Saints who always lit the light of love. It is necessary to consolidate and strengthen pillars of love and end the era of hate. The technical session of this historical seminar will further continue in various phases.

Kashmir society international and Markaz Noor which have already signed Memorandum of Understanding (MOU) will hold another National seminar in the second week of November. Renzushah appreciated UT administration for agreeing to the suggestion of Writers and intellectuals of Kashmir to make Shergari as the abode of the Sufi cultural Centre.