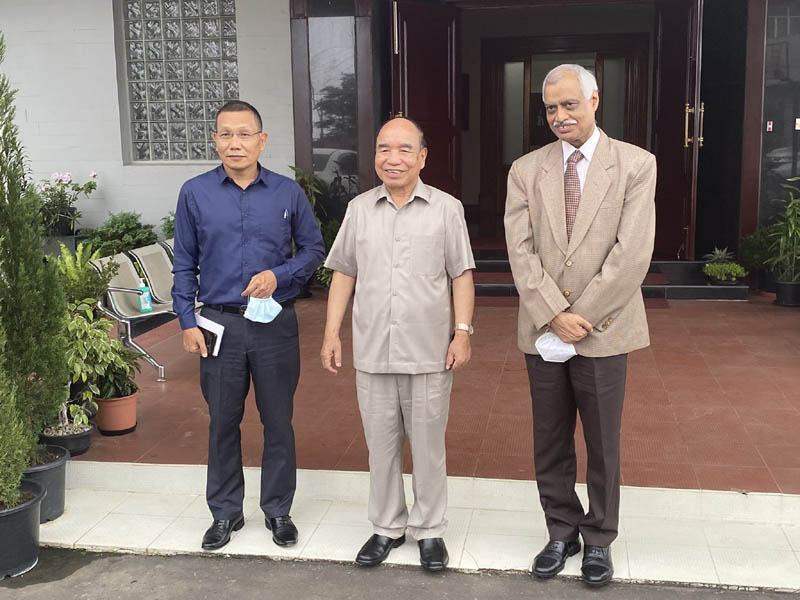 Satyendra Garg appraised the Chief Minister about the discussion which took place at Silchar between the Home Secretary of Mizoram and her counterpart from Assam, as a result of which the main concern of traffic between the states have been restored.

The Joint Secretary conveyed to the Chief Minister his expectation that normalcy is restored soon. He also addressed the larger issue concerning the border for which he hoped a mutually acceptable end could be achieved.

The Joint Secretary also met with Chief Secretary of Mizoram Pu Lalnunmawia Chuaungo and also with leaders of the Joint-NGOs.

In his interview with the Governor of Mizoram, Satyendra Garg had discussed the details and expected outcomes of the joint border talk held on Wednesday under his chairmanship at Silchar, Assam in which the Home Secretary, Mizoram and her counterpart from Assam were negotiating how to diffuse tension in the shared border areas.

He had apprised the Governor that the bilateral talk at the state Home Secretary level was a success. And that the road blockade in the border area had been cleared and the vehicles carrying essential goods were starting to enter Mizoram from last night.

He had also expressed his optimism of bringing back normalcy to the border area by the joint efforts of the two states as soon as possible. And, he was also with the view that the marathon joint meeting held by the officials from the two states at Silchar, Assam will bear fruitful results, eventually.

Governor P.S. Sreedharan Pillai had also discussed with the visiting Joint Secretary (North East) of the state’s point of view and where Mizoram stands on border issues.

He had expressed his full faith in the state officials to come up with a meaningful solution through dialogue and peaceful manners. Governor P.S. Sreedharan Pillai had also gifted a book written by him “Dark Days of Democracy” to Satyendra Garg as a token of appreciation for the latter’s effort in peace talk.