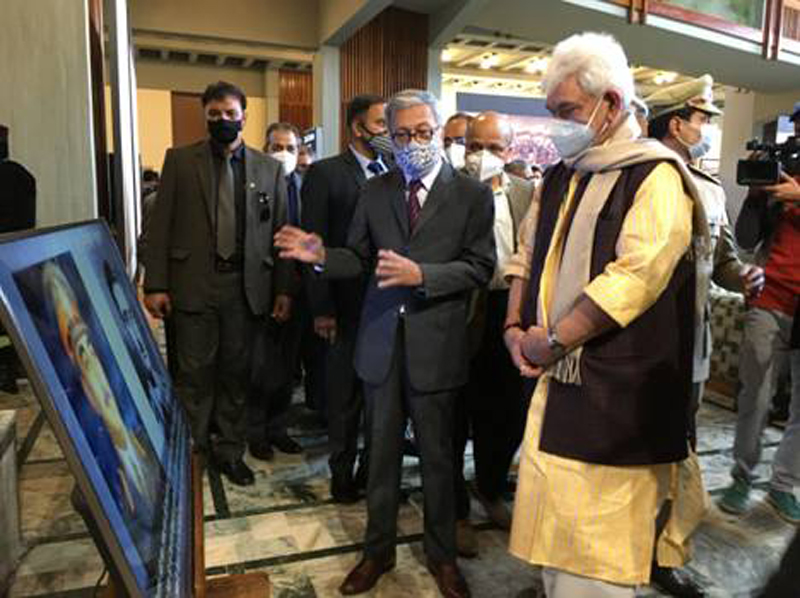 Jammu and Kashmir: Two-day national symposium on “Memories of 22 October 1947” inaugurated at Srinagar

Srinagar: A two-day national symposium and exhibition on “MEMORIES OF 22 OCTOBER 1947” organised by the National Museum Institute of History of Art, Conservation & Museology (NMI) of Ministry of Culture was inaugurated by Lt Governor (LG) Jammu and Kashmir Manoj Sinha at Kashmir International Conference Centre on Thursday.

The event is significant as it was on 22 October, 1947 that Pakistan made an attempt to invade Kashmir in the guise of Operation Gulmarg.

The two-day National Symposium on 22 & 23 Oct 2020 and the Exhibition commencing on 22 Oct 2020 is an attempt to deliberate upon the records and history of this deceitful attack and subsequent victory of India.

The evidences of the treacherous attack by Pakistan, stories of resistance and bravery of Kashmiris, narrative of Indian Army victory over the invaders need to be told to people.

Lt Governor Manoj Sinha, while delivering his address, said that though a lot of time has passed since the 1947 invasion attempt, the wounds have still not healed and the people of Kashmir will soon come to know about the truth behind the events.

He said that terror is the real enemy of humanity and the stories of terror unleashed by Pakistani raiders need to be told.

Sinha said that everybody in Jammu and Kashmir has suffered deceit at the hands of Pakistan because of which the state lags behind in development.

He added that though there will be obstacles in making J&K the most developed region of the country, the administration is fully prepared to meet them.

Addressing the gathering through video conference, Prahlad Singh Patel remarked that the attempted invasion of 1947 was the first attack on the newly gained independence of India, and the nation will never forget the contribution of the Indian armed forces and local people who fought the invaders and played a decisive role in turning them back.

Earlier delivering the Welcome Address, Raghvendra Singh said that the narrative of the past over 70 years is based on preconceived notions and there is a need to bring out the real stories in front of people. He said that the time has come where we need to decide whether or not we need to change the narrative.

Advisor to LG Shri Baseer Ahmad Khan said on the occasion that being a local, he had first-hand experience of what the place and its people had to go through. He said there is an ever growing need to expose the nefarious designs of Pakistan and make the younger generation aware about how Jammu and Kashmir has suffered at the hands of the neighbouring country.

Saluting the efforts of Maqbool Sherwani, Khan said that there were many from the local population who put up a brave fight against the intruders but unfortunately their contributions are not recognised.

Delivering the Note of Thanks, Manavi Seth, in her address, said that the event is a tribute to the valour and bravery of Kashmiris and will serve as a first step towards setting up of a museum dedicated to the Memories of 22 October 1947.

Lt Governor Manoj Sinha also inaugurated an exhibition on the occasion. The Exhibition on the ‘Memories of 22 Oct 2020’ comprise of graphic panels and videos showcasing a chronology of events as well as prominent narratives of the invasion on 22 Oct 1947 and subsequent unfolding of actions.

The inaugural session was followed by sessions in which various eminent academicians, researchers and distinguished personalities presented papers and presentations on various subjects related to the 1947 attack.