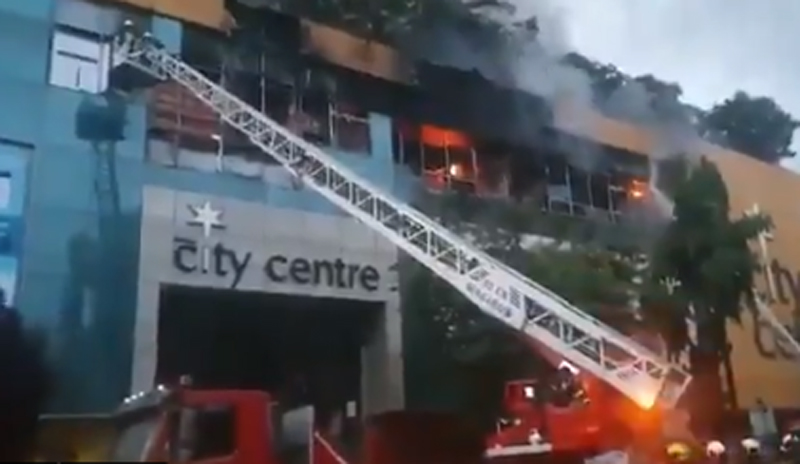 Fire breaks out at Mumbai mall: 2 firemen injured, 3500 people evacuated from nearby building

Mumbai: As many as 3500 people were evacuated from a Mumbai building after a fire in a neighbouring mall escalated to level 5, media reports said on Friday.

Two firemen were injured in the incident.

Fire fighters are currently fighting to bring the fire at City Centre Mall in Nagpada area of south Mumbai under control.

A fire Incident was reported at City Center Mall in Nagpada last night at 8.53pm.

Mumbai Fire Brigade declared Brigade Call at 2.41am & Fire Dousing is still on.

Approx. 3500 people residing at Orchid Enclave Bldg. of 55 storey, were shifted to a safer place as precaution. 1/2 pic.twitter.com/bEFU0UOt7A

At least 24 fire engines, 16 jumbo tankers and 250 fire brigade personnel are at the spot trying to control the blaze, reports Hindustan Times.

According to reports, a fireman received burn injuries during the operation and was immediately rushed to Mumbai's JJ Hospital for medical treatment.

The fire was initially categorised as level 1 (minor) but was upgraded to level-3 (major) at around 2245 hrs when flames spread to other parts of the complex. It was later upgraded to level-5 and the Mumbai fire brigade has declared this brigade call. This means that help has been sought from HPCL, BPCL, BPT. So far, there is no news of anyone being trapped inside the mall.

According to fire brigade officials, the exact cause of the fire was not yet known. Locals said that the mall mainly houses shops selling mobile phone accessories.