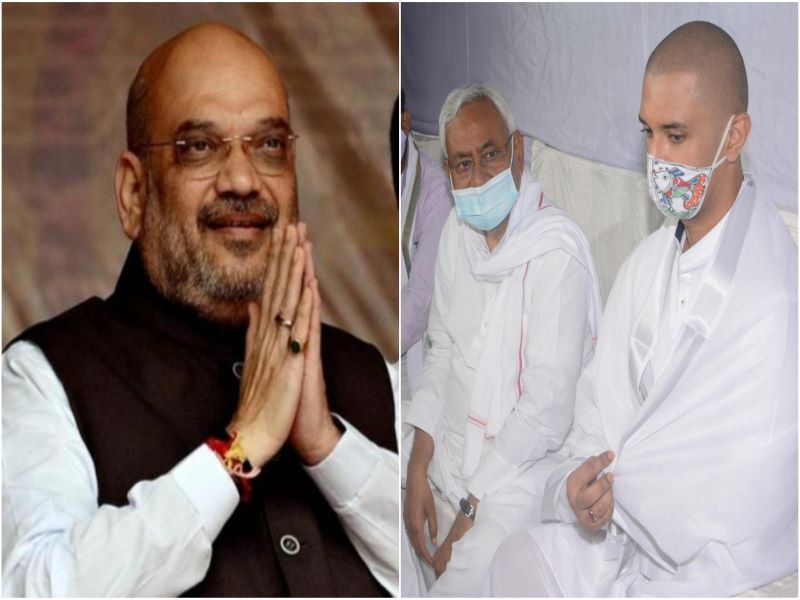 Patna/IBNS: LJP Chief Chirag Paswan on Thursday used the occasion of Home Minister Amit Shah's birthday to reiterate his support for BJP while renewing his attack on Janata Dal (United) Chief and Bihar Chief Minister Nitish Kumar even after both Paswan and Kumar delivered a rare image for the cameras in poll season when Nitish attended a memorial service for Union Minister Ram Vilas Paswan.

In his birthday message, Paswan called Amit Shah a "guardian" and an inspiration for lakhs of youths like him.

"Best wishes to the country's Home Minister, guardian Amit Shah on his birthday. Sir you remain an inspiration for lakhs of youth like me to work for the country. May god keep you healthy and shower his blessings on you," Chirag Paswan wrote in his birthday message to the senior BJP leader who turned 56 on Thursday.

Reports said Paswan also spoke to Amit Shah on the phone on the occasion.

His continuous attempts to underscore LJP's ties with BJP has left JD(U) in doubts that the ruling party is secretly supporting Chirag Paswan in his endeavour to prevent Nitish Kumar from being elected the CM of Bihar for the sixth time.

Despite BJP's multiple pronouncements that Nitish remains the face of NDA and leaders like Prakash Javadekar declaring that BJP does not have a B team or a C team, Nitish Kumar has not been able to convince his supporters on this account.

On the other hand, LJP chief has managed to play on Nitish Kumar's insecurity by stressing on his devotion to Prime Minister Narendra Modi and hoping to form a government with BJP after the Bihar polls.

Media reports said Amit Shah had to step in and reassure Nitish Kumar after Paswan's insult and accusations upset him.

According to an NDTV report, Paswan, however, said he had spoken to Shah to include his agenda of "Bihar First, Bihari First" in NDA agenda even if it was not possible for him to include LJP in seat sharing, and if not he should be allowed to put up candidates against JDU. On this, Paswan had claimed, Shah maintained silence and quietly listened to what he had to say.