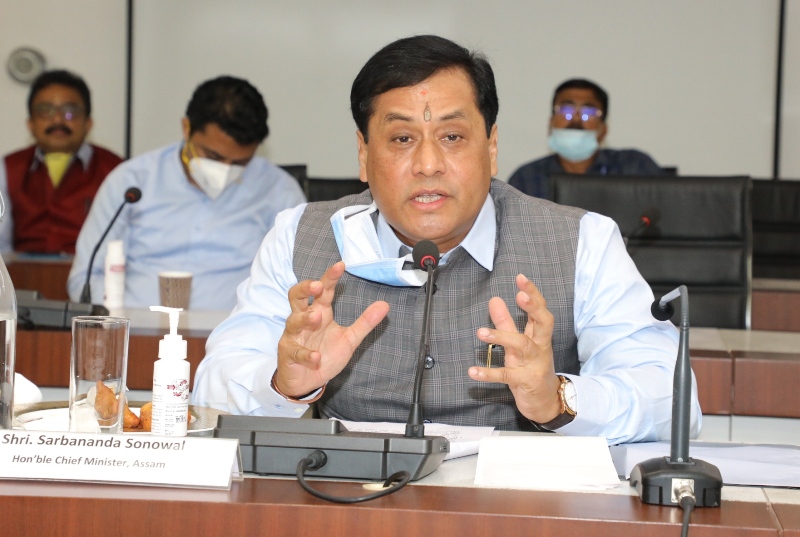 Speed up Aadhaar enrolment, gear up for distributing another 1 lakh land pattas by Dec: Assam CM to Deputy Commissioners

Guwahati/IBNS: Assam Chief Minister Sarbananda Sonowal on Tuesday held a video conference with the Deputy Commissioners (DCs) and Superintendents of Police (SPs) of all districts at his conference hall at Janata Bhawan here and reviewed the law and order situation before the forthcoming Durga Puja festivities, the COVID-19 scenario and the rate of Aadhaar enrolment in the districts among others.

Saying that Aadhaar enrolment has become very important to derive the benefit of the central government schemes, the Assam Chief Minister asked the DCs to take steps to speed up the rate of enrolment as several districts have been performing very poorly in enrolment.

He directed the DCs to engage more private vendors to carry out the Aadhaar enrolment expediently and removing those vendors delaying the process so that hundred per cent enrolment can be achieved by the year-end.

He also stressed on the need to engage local youths in the process for the creation of income opportunities while speeding up the process.

Referring to Prime Minister Narendra Modi led Central government’s act of making Aadhaar registration mandatory for Central Government schemes, Sonowal said that it is a step to prevent middlemen from siphoning off money meant for the poor and he asked the DCs to give utmost priority to increase rate of Aadhaar enrolment.

Appreciating the district administrations for their role in successfully providing land pattas to one lakh beneficiaries by the state government, Sonowal asked DCs to gear up for providing another one lakh land pattas within December this year. Without land rights the indigenous people cannot assert themselves and DCs must take it as their moral responsibility to make this second phase of the historic initiative of the state government to provide land pattas to indigenous landless people a grand success like the first phase, he added.

Sonowal directed the SPs to stay prepared for preventing subversive activities by anti-social elements during the Durga puja festivities while asking the DCs to ensure observance of COVID19 protocols by puja committees.

The Assam Chief Minister issued instructions to the administration of the districts covered by Kaziranga National Park for staying alert to prevent incidents of poaching during the festival time.