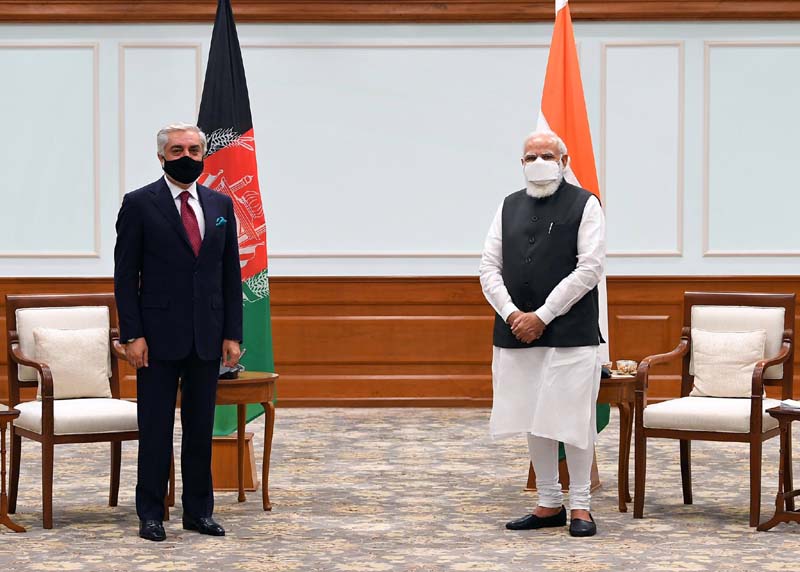 New Delhi: Afghanistan leader  Abdullah Abdullah, Chairman has said he did not discuss the military role of India in Afghanistan during talks with Indian leadership over Afghan peace process.

"No. Absolutely not. I did not raise that idea. The point is that we hope that Afghanistan will be able to stand on its own feet," he told ANI.

"As you know that US troops are the main part of it," he said.

"They have withdrawn from Afghanistan. Still, they are present there but that will not be forever,"  Abdullah Abdullah, Chairman, High Council for National Reconciliation of Afghanistan, told ANI when asked whether he discussed any probable military role of India in Afghanistan.

He is currently on a five-day visit to India.

In keeping with the government’s policy of Neighbourhood First, the Prime Minister reaffirmed India’s long term commitment to further deepening the historical ties between India and Afghanistan.

The two leaders discussed issues of bilateral and regional interest. Dr. Abdullah Abdullah briefed the Prime Minster on the Afghan peace process and the ongoing talks in Doha.

Bilateral issues, including India's development cooperation with Afghanistan, were discussed.

Abdullah Abdullah appreciated Indian’s developmental commitment of US$ 3 billion, projects under which are benefiting Afghans across all of its 34 provinces.

The Prime Minister reiterated India's commitment towards sustainable peace and prosperity in Afghanistan and welcomed efforts towards a comprehensive and permanent ceasefire in Afghanistan.

National Security Advisor Shri Ajit Doval called on Dr Abdullah Abdullah on October 7 and discussed the Afghan peace process and related issues, including increased levels of violence across Afghanistan and peace and security in the region.