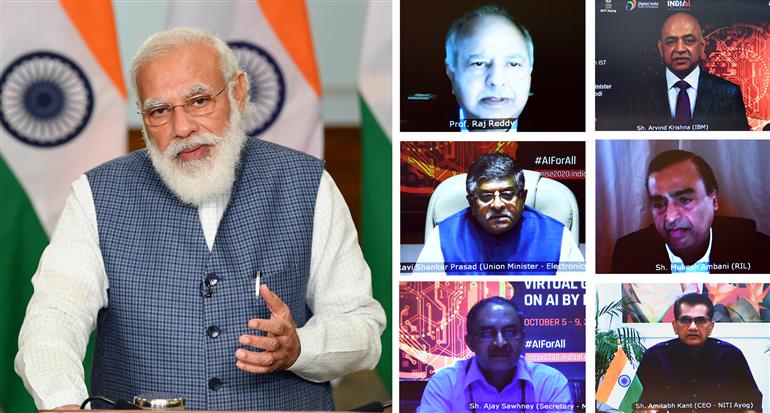 RAISE 2020 is a global meeting of minds to exchange ideas and chart a course for using AI for social transformation, inclusion and empowerment in areas like Healthcare, Agriculture, Education and Smart Mobility, among other sectors.

The Prime Minister praised the organizers for encouraging discussion on Artificial Intelligence.

He said Technology has transformed our workplaces and has improved connectivity.

He hoped the merger between social responsibility and AI would enrich AI with human touch.

He said the teamwork of AI with humans can do wonders for our planet.

Elaborated on some of India’s efforts to encourage AI. #Raise2020 pic.twitter.com/UzlzP9WP9z

The Prime Minister stressed how the world's largest unique identity system - Aadhaar along with the world's most innovative digital payments system - UPI has enabled providing access to digital services, including financial services, like Direct Cash Transfers to the poor and marginalised.

"During the pandemic, it has enabled in reaching out to people with help, at the earliest and in the most efficient manner, he said.

The Prime Minister wished India to become a global hub for Artificial Intelligence and hoped many more Indians would start working on this in the times to come.

He said the approach towards this goal is powered by core principles of: Teamwork, Trust, Collaboration, Responsibility and Inclusivity.

The Prime Minister said India has recently adopted the National Education Policy 2020, which focuses on technology-based learning and skilling as a major part of education. He added E-courses will also be developed in various regional languages and dialects.

"This whole effort will benefit from Natural Language Processing (NLP) capabilities of AI platforms. Under the ‘Responsible AI for Youth’ program launched in April 2020, more than 11,000 students from schools completed the basic course. They are now building their AI projects," the PM said.

The Prime Minister said the National Educational Technology Forum will create an e-Education unit to boost the digital infrastructure, digital content and capacity.

He elaborated the steps taken to keep pace with the emerging technologies like setting up of Virtual labs, Atal Innovation Mission.

He said the National Programme on Artificial Intelligence will be dedicated for solving problems of society.

The Prime Minister said Algorithm Transparency is key to establishing trust in how AI is used and it remains our collective responsibility to ensure it.

He urged to protect the world against the weaponization of AI by Non-State Actors.

He said human creativity and human emotions continue to be our greatest strength and are our unique advantage over machines. He urged everyone to think about how this intellectual edge over machines can be retained and ensure human intelligence is always a few steps ahead of AI.

He said we should think about how AI can help humans to increase their own capacities.

It remains our collective responsibility to ensure trust in AI is maintained and we use AI for larger public good. #Raise2020 pic.twitter.com/CDJspiwEPp

The Prime Minister said AI will unlock the unique potential of each person and will empower them to contribute more effectively to the society.

He urged the participants at RAISE 2020 to exchange ideas and chart a common course for the adoption of Artificial Intelligence. He wished that the Action Roadmap for Responsible AI created out of the discussion would help in transforming the  lives and livelihoods of people across the world.