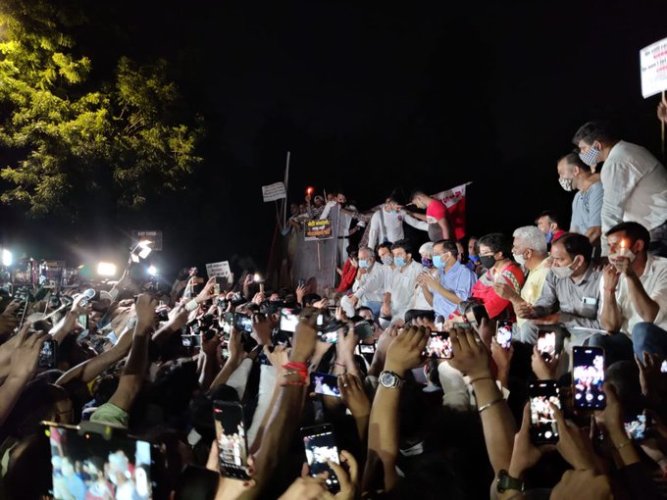 Hundreds of people including leaders from opposition parties gathered at the protest to demand stringent punishment for the accused.

Joining the protest, Kejriwal said: "There should be no politics on this issue. Why should such an incident happen in UP, Madhya Pradesh, Rajasthan, Mumbai or Delhi? No rape incidents should happen in the country."

He also demanded stringent punishment for the crime.

"The entire country wants that the culprits should be given stringent punishment. Some people feel that attempts are being made to save them. At this time, the victim's family needs all the possible help," he said in a message for the UP government.

Several protesters could be seen standing with candles in hand, as policemen watched over them.

Earlier, the Delhi Police banned all kinds of gathering in and around the iconic India Gate after which the protest shifted to Jantar Mantar.

CPI(M) leader Sitaram Yechury, who attended the protest, said: "The UP government has no right to stay in power. Our demand is that justice should be served."

"The silence of the central government and the top leadership of the BJP on such a heinous crime and the UP government's response thereafter speak volumes about the authoritarian and anti-democratic chehra, chaal, charitra, and chintan of the ruling party," he said.

Chief Minister Yogi Adityanath, whose resignation has been demanded by various opposition politicians and angry people on social media, had constituted a SIT to probe into the heinous crime and also ordered a trial against the accused in a fast-track court.