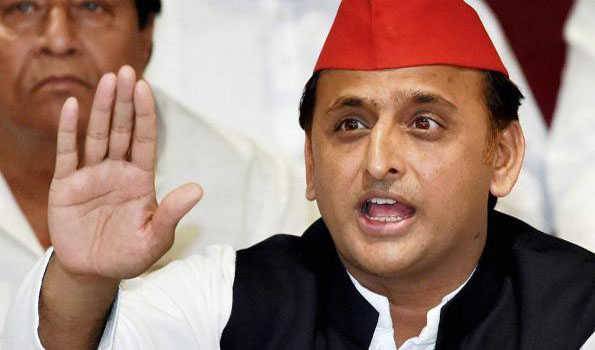 Lucknow/UNI: Accusing the Bharatiya Janata Party (BJP) of trying new tactics to cover up the truth, Samajwadi Party (SP) president Akhilesh Yadav said that lies and betrayals have become the main weapons of the BJP's politics.

In a statement issued on Wednesday, Yadav said that no one can compete with BJP in covering up the truth and trying new tactics to mislead the people.

"The farmers are in a miserable condition while the BJP government is working hard to confuse them. There is widespread public anger over the new Agricultural Laws in not just the state but in the country."

He said that for the women and minor girls, Uttar Pradesh has turned into an 'insecure jungle.'

"The family members of girls are living in fear due to frequent incidents of abductions and rapes. The BJP leadership and the Chief Minister are busy praising themselves from their own mouths, oblivious of the growing infamy of the state. How long will the people tolerate this?"

Yadav said that the farmers are being attacked from all sides of the BJP government.

"On one hand, there is a conspiracy to displace them from their farming through the agricultural laws, on the other hand, arbitrary government promotion is being done on paddy purchase," he said.

"Let alone the Minimum Support Price (MSP), the government purchase agencies are making the farmers return. Farmers are facing a tough time due to no government orders on paddy purchase in Azamgarh while in Jhansi, government agencies have refused paddy purchase. Farmers are not getting the appropriate prices in the markets of Baghpat, they are being looted," he claimed.

Lashing out at the police, the former UP CM alleged that the police, responsible for the security of women, have become another moniker for atrocities against women in the state.

He said: "Gorakhpur is the home district of the Chief Minister, but there too, the daughters-sisters are not safe. A girl, upset with eve-teasing, died by suicide in Gagaha while a dead woman's earrings were stolen in a hospital situated in Cantt. A woman was beaten up at a police station in Hamipur, what could be more shameful than this?"