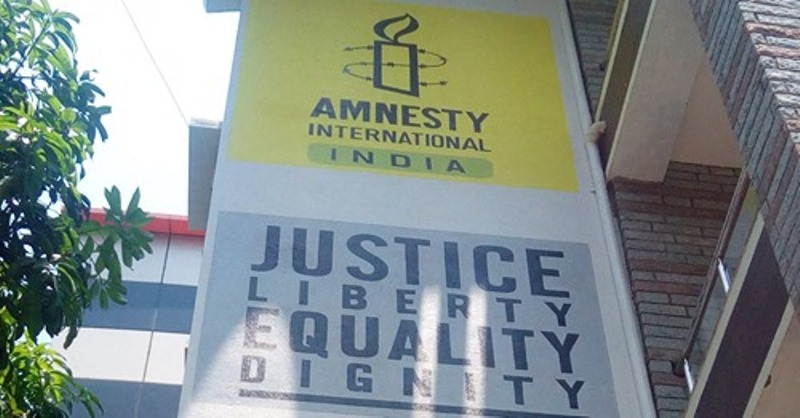 Glossy statements about humanitarian work are nothing but a ploy: Centre on Amnesty International

New Delhi/IBNS: Hours after Amnesty International declared to halt its India operations citing an alleged witch-hunt by the Indian government, the Ministry of Home Affairs on Tuesday evening claimed that all the "glossy statements about humanitarian work are nothing but a ploy to divert attention" from their 'illegal activities'.

The non-profit human rights organisation in its latest statement said the freezing of its bank accounts has left all works to a "grinding halt".

The continuing crackdown on @AIIndia over the last two years and the complete freezing of bank accounts is not accidental. This is not the end of Amnesty India's commitment to human rights, we will not be silenced by the attacks of the government. pic.twitter.com/pgZprkfIfe

In a direct attack on the government, the organisation said, "It is a dismal day when a country of India’s stature, a rising global power and a member of the UN Human Rights Council, with a constitution which commits to human rights and whose national human rights movements have influenced the world, so brazenly seeks to silence those who pursue accountability and justice.

In response, the Indian government said: "Owing to these illegal practices of Amnesty, the previous government had also rejected the repeated applications of Amnesty to receive funds from overseas. This had led Amnesty to suspend its India operations once during that period as well."

"This bipartisan and purely legal approach towards Amnesty, under different governments, makes it clear that the entire fault lies in the dubious processes adopted by Amnesty to secure funds for its operations," it said.

"All the glossy statements about humanitarian work and speaking truth to power are nothing but a ploy to divert attention from their activities which were in clear contravention of laid down Indian laws," the Centre stated.

"Such statements are also an attempt to extraneously influence the course of investigations by multiple agencies into the irregularities and illegalities carried out over the last few years."

Human Rights cannot be an excuse for defying the law of the land
Press Release 👇https://t.co/0iYvSzxX85

Stating the alleged irregularities in receiving foreign funds are being probed by the Enforcement  Directorate (ED), the government said the organisation got money through Foreign Direct Investment (FDI) route, which is not allowed for non-profits.

The government clarified that Amnesty is free to continue humanitarian work in India, as is being done by many other organizations.

"However, India, by settled law, does not allow interference in domestic political debates by entities funded by foreign donations. This law applies equally to all and it shall apply to Amnesty International as well," it said.

"The stand taken and the statements made by Amnesty International are unfortunate, exaggerated and far from the truth," said the government statement.