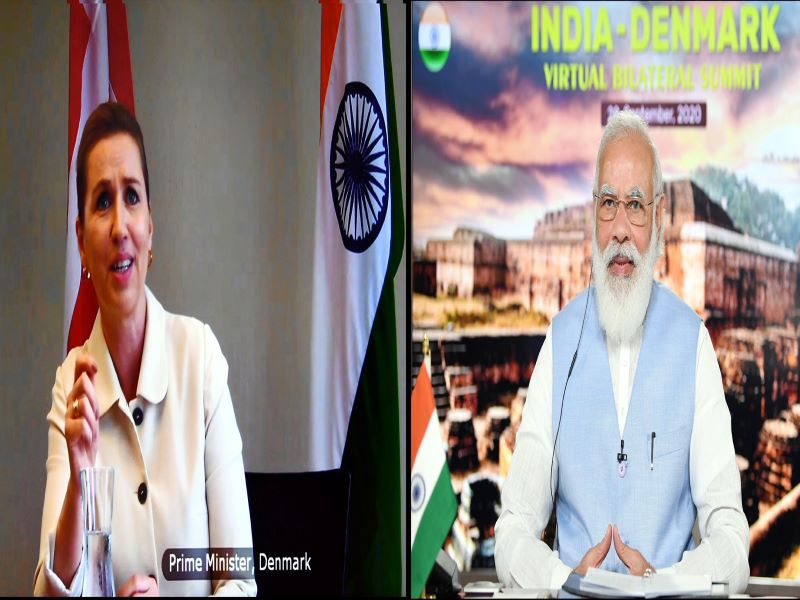 New Delhi/IBNS: India and Denmark on Monday agreed to elevate their relations to a Green Strategic Partnership with the aim to build on and consolidate the existing agreement establishing a Joint Commission for Cooperation between the two countries for political cooperation focussing on economic and commercial sectors, science and technology, environment, energy, education and culture.

The decision was taken during an hour-long virtual bilateral summit on Monday between Prime Minister Narendra Modi and his Danish counterpart Mette Frederiksen who decided to cooperate through relevant ministries, institutions and stakeholders to meet the goals of the partnership, a statement issued by the government said.

The Green Strategic Partnership is a mutually beneficial arrangement to advance political cooperation, expand economic relations and green growth, create jobs and strengthen cooperation on addressing global challenges and opportunities with focus on an ambitious implementation of the Paris Agreement and the UN Sustainable Development Goals.

The Prime Minister said 140 Danish companies are present in India and already “making in India for the world”.

Dwelling on the mantra “Denmark has the skills and India has the scale”, the Prime Minister stressed adding “scope” and “speed” to this.

The International Solar Alliance (ISA) is an alliance of 121 countries initiated by India, most of them being sunshine countries, which lie either completely or partly between the Tropic of Cancer and the Tropic of Capricorn. The primary objective of the alliance is to work for efficient consumption of solar energy to reduce dependence on fossil fuels.

This was also the first such virtual Summit held with any country in EU bilaterally.

“In the current Covid-19 pandemic scenario, the successful conduct of the Virtual Summit shows the high degree of commitment the two leaders attach to strengthening of their bilateral relations,” a joint statement issued by India and Denmark said, adding that both the Prime Ministers recalled the tele-conversation on May 14, during which they had exchanged views

“PM Narendra Modi thanked Danish Prime Minister for her offer to host the Second Nordic Summit in Copenhagen and conveyed that he would be happy to visit Denmark, once the Covid situation improves.  He also invited the Danish PM to visit India soon,” the statement added.

Both leaders appreciated the deep cooperation on maritime affairs and noted the potential for enhancing cooperation in ship-building and design, maritime services and Green shipping, as well as port development, it added.

The two Prime Ministers underlined that they would encourage business delegations, market access activities for SMEs and enhance ease of doing business.

India and Denmark confirmed the emerging cooperation in Intellectual Property Rights, which will help to modernize and strengthen their national intellectual property systems to promote innovation, creativity and technological advancement.

Both sides expressed their commitment for working towards an ambitious, fair, and mutually beneficial Trade and Investment Agreement between EU and India to further strengthen and deepen the EU-India ties.

Both sides also expressed the willingness to collaborate within the framework of Arctic Council for addressing the need of environmental protection and combating climate change.

The two Prime Ministers agreed to work towards further expanding and strengthening the existing Government-to-Government cooperation on environment/water and circular economy.

They further agreed to cooperate in water efficiency and non-revenue water (water loss) and in this context tasked the Indian Ministry of Jal Shakti and the Danish Environmental Protection Agency and the Danish Ministry of Environment and Food to develop a Work Plan for an initial period of three years (2021-23).

They agreed to work towards further expanding and strengthening the existing Government-to-Government cooperation on environment/water and circular economy. They further agreed to cooperate in water efficiency and non-revenue water (water loss) and in this context tasked the Indian Ministry of Jal Shakti and the Danish Environmental Protection Agency and the Danish Ministry of Environment and Food to develop a Work Plan for an initial period of three years (2021-23).

Joint Secretary (Central Europe) in the Ministry of External Affairs Neeta Bhushan said at a media briefing after the summit that the issue of extradition of Purulia arms drop mastermind Kim Davy was raised in the talks, and it was mutually agreed that both sides will engage their of officials and be in touch for an early resolution of the matter.

India has been demanding the extradition of Davy from Denmark for trial in the sensational case.

On 17 December 1995, unauthorised arms were dropped from an Atonov An-26 aircraft in Purulia district in West Bengal. The main accused Kim Davy managed to escape India, and was traced by Danish authorities in 2007. They decided to extradite Davis to India in 2010, but failed to defend the extradition to India in Danish High Court.