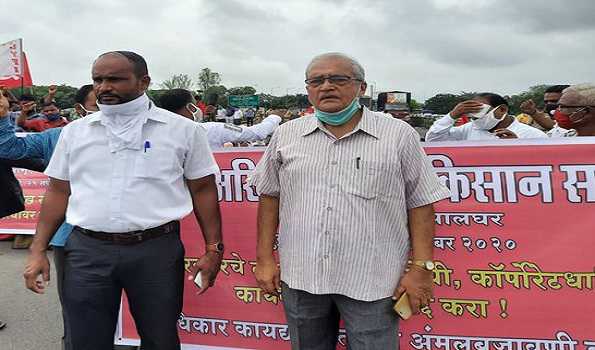 Thane/UNI: Over 50,000 peasants in 21 districts, led by the AIKS, blocked national and state highways in Maharashtra and burnt copies of the three agricultural bills.

They included a large number of women and youth led by AIDWA and DYFI. These were the largest mass actions in Maharashtra ever since the lockdown began six months ago.

There were massive 'Rasta Roko' protests in Palghar, Thane, Nashik and Ahmednagar districts, in which a total of over 30,000 peasants participated in strength, AIKS Dr Ashok Dhawale said in an official statement released at Thane.

Over 10,000 peasants blocked the Mumbai-Baroda-Jaipur-Delhi national highway at two places in Palghar district - Charoti in Dahanu tehsil and Boisar Naka in Palghar tehsil.

In Nashik, Ahmednagar, Palghar, Thane and many other districts, major state highways were blocked in several places, the release added.

At a few places, workers of the Congress, NCP and Shiv Sena also joined the protests.