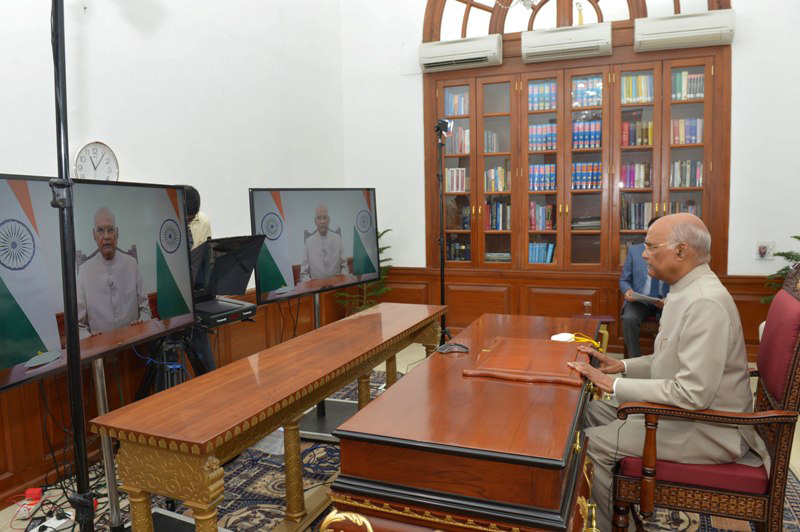 Let us strive to make Jammu and Kashmir a Firdaus on Earth: Ram Nath Kovind

New Delhi: President Ram Nath Kovind has said he wants to see Jammu and Kashmir emerge as a centre of knowledge, enterprise, innovation and skill development.

Appreciating the scholarly pursuits of the region, the President said that determined efforts should be made to make this paradise a hub of knowledge, innovation and learning by implementing NEP in letter and spirit.

Taking inspiration from the captivating couplet, he said that these steps would make Jammu and Kashmir once again a “Firdaus on the earth, a bright jewel on the crown of Mother India” as it was referred to in the medieval age.

Talking about the rich heritage in the field of education inherited by Jammu and Kashmir, President Kovind said that it has been a centre of literature and learning since time immemorial.

Citing the examples of Kalhana’s Rajtarangini and the Mahayana Buddhism, the tenets of which were popular in Kashmir, he opined that history of India’s cultural traditions would remain incomplete without taking them into consideration.

Reiterating the importance of NEP, the President said that India has an unprecedented demographic dividend but it could be positively realized only if the young people constituting a substantial segment of the population become skilled, professionally competent, and above all educated in the real sense.

He further added that the implementation of the education policy will produce students with “ignited minds”.

Emphasizing on value-based education, President Kovind said that it is important to understand our tradition and rich cultural heritage which can be achieved only in our mother tongue.

It is this mother tongue that is being encouraged in the new education policy as it adheres to the cultural ethos of our country.

He further observed that the three-language formula which is envisioned in this policy is of immense significance and could promote multilingualism as well as national unity but at the same time no language will be imposed on any state or union territory.

Emphasizing on the principle of Atmanirbhar Bharat, he said that vocational education as emulated in the NEP 2020 will be helpful in achieving this goal.

The President extended his greetings to the youth of Jammu and Kashmir to fulfill the objectives of this policy and a peaceful and prosperous future.