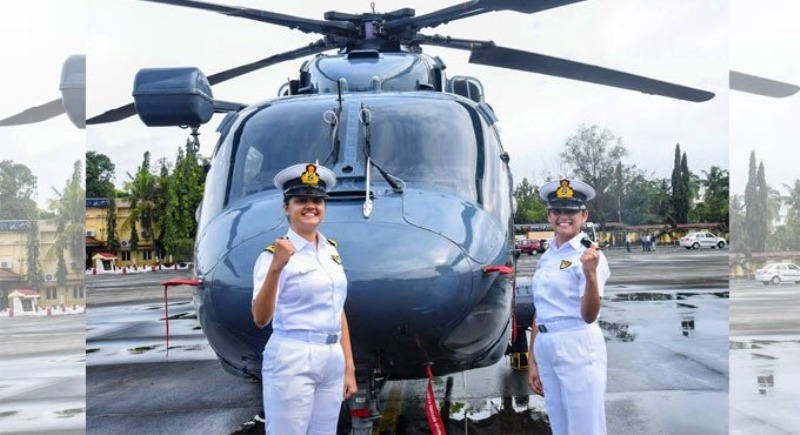 New Delhi: In a historic stance that will redefine gender equality in the Indian Navy, the force has deployed two women officers on warships as part of the crew.

Traditionally, the roles of women in the naval service were restricted to fixing wing aircraft, reports The Indian Express.

The two women officers passed out of the Navy's Observer Course, at a ceremony held at INS Garuda, the air station of the Southern Naval Command on Monday, reports the newspaper.

The two women officers are engineering graduates in computer science.

In 2018, they were commissioned into the navy.

Speaking on their role,  Indian Navy spokesperson Commander Vivek Madhwal told Times Now: "They would in effect, be the first set of women airborne combatants who would be operating from warships. Earlier, entry of women was restricted to the fixed-wing aircraft that took off and landed ashore."

The two are a part of a group of 17 officers of the Navy, including four women officers and three officers of the Indian Coast Guard, who were awarded ‘Wings’ on graduating as ‘Observers’ at a ceremony held today at INS Garuda, Indian Navy spokesperson Commander Vivek Madhwal said in a statement.

The ceremony was presided by Chief Staff Officer (Training) Rear Admiral Antony George, who presented the awards and coveted wings to the graduating officers.

In addition, the Chief guest also awarded the ‘Instructor Badge’ to six other officers, (five from the Indian Navy including a woman and another from Indian Coast Guard) who had successfully graduated as Qualified Navigation Instructors (QNI) on the occasion, he said.

Speaking on the occasion, Rear Admiral Antony George while complementing the graduating officers highlighted the fact that it is a landmark occasion wherein for the first-time women are going to be trained in helicopter operations which would ultimately pave way for the deployment of women in frontline warships of Indian Navy

These officers would serve on-board Maritime Reconnaissance and Anti-Submarine Warfare aircraft of the Indian Navy and Indian Coast Guard.

From 22nd SSC Observer Course SLt Kreeshma R was awarded the Book Prize for being adjudged ‘Best in Overall Order of Merit’.

"The navy is giving everybody an opportunity every day," Singh told NDTV.

"Yes, we're breaking barriers every day but there are a lot of opportunities coming up every day," she said.

"Whatever role the Indian Navy gives us, we will gladly take them," Sub Lieutenant Singh, a fourth generation armed forces officer, told NDTV.

Sub Lieutenant Tyagi, who is from Ghaziabad near Delhi, told the Indian channel that they underwent similar training like their male counterparts.

"It is a huge responsibility, the task is challenge. We are looking forward to it," she said.

My hearty congratulations to Sub-lieutenants Ms.Kumudini Tyagi and Ms.Riti Singh for being the first women airborne combatants. They have proved that women are capable of steering challenging heights. pic.twitter.com/zM6WuQsv5z

Praising the two officers, Tamil Nadu CM Edappadi Karuppa Palaniswami tweeted: "My hearty congratulations to Sub-lieutenants Ms.Kumudini Tyagi and Ms.Riti Singh for being the first women airborne combatants. They have proved that women are capable of steering challenging heights."