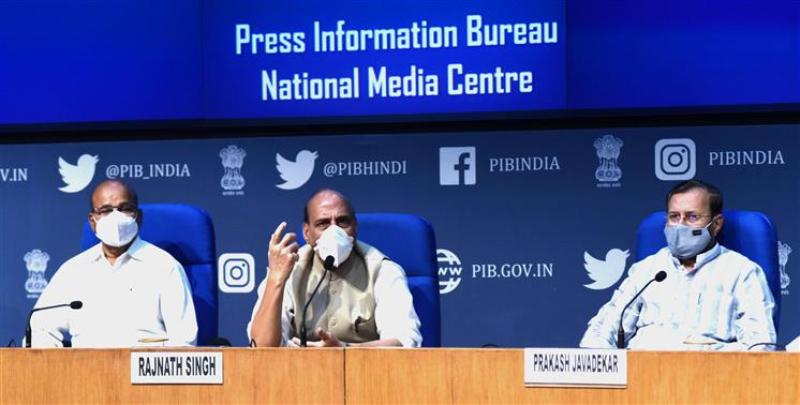 New Delhi/UNI:  Defence Minister Rajnath Singh on Sunday described as "painful and shameful" the Opposition ruckus during the passage of two farm Bills, saying he had never seen such misconduct in Parliament.

Addressing a press conference here this evening, Singh lashed out at the Opposition, saying, "What happened in Rajya Sabha today was saddening, unfortunate and shameful. It is the responsibility of the ruling side to enable discussions in the House but it is also the duty of the Opposition to maintain
decorum."

He regretted the unruly scenes that were witnessed in the House, saying "everyone saw misbehaviour with the Chair, members tore the Rule Book, climbed podium. I have never seen such misconduct in Parliament."

The Defence Minister reiterated that Minimum Support Price (MSP) and APMC would continue. The Bills passed in the Rajya Sabha today "will empower farmers to sell their produce any where in the country where they get better price."

Taking the Opposition head-on for their behaviour in obstructing the passage of the controversial Bills namely Farmer's Produce Trade and Commerce (Promotion and Facilitation) Bill, 2020, and the Farmers (Empowerment and Protection) Agreement of Price Assurance and Farm Services Bill, 2020, he asked, "Even if Opposition was not convinced, does it allow them to be violent, attack the Chair?"

Besides the Defence Minister, also present at the hurriedly-convened press conference were five Cabinet colleagues Piyush Goyal, Prakash Javadekar, Prahalad Joshi, Thawar Chand Gehlot, and Mukhtar Abbas Naqvi. The agenda of the interaction was to answer questions related to the Centre's farm-related Bills and the ruckus in Rajya Sabha earlier in the day.

On the no-confidence motion initiated by the Opposiion against Rajya Sabha Deputy Chairman Harivansh, he merely said notice had been given to Chairman Venkaiah Naidu. "A decision will be taken by him. I don't want to say anything politically. This is the prerogative of the Chairman."

Referring to the resignation submitted by Harsimrat Kaur Badal from the Union Cabinet, he said there were some political reasons behind every such decision and he did't want to comment on why she took this decision.