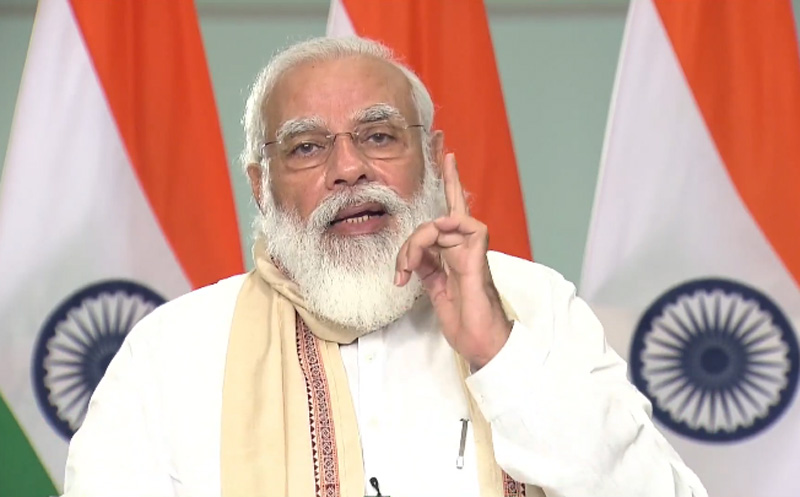 New Delhi/IBNS: In a direct attack on the Congress over the Agricultural Produce Market Committee (APMC) Act, Prime Minister Narendra Modi on Friday said people who ruled the country for decades were misleading farmers.

Modi made the comment after virtually inaugurating the Kosi rail mega project in Bihar, a day after a member of the ruling Bharatiya Janata Party (BJP)'s ally Akali Dal quit the union cabinet over the modification brought to the Act.

"People, who have remained in power for decades, are trying to mislead farmers. They are lying to farmers. For political reasons during the polls, they had promised the same thing in their own manifesto but forgot after the elections.

"When BJP is going to fulfill the same promise by amending the APMC Act, they are misleading farmers to play politics."

"It is only the BJP-led NDA government that fulfilled the promises of farmers. Now they (Congress) are saying farmers won't get the Minimum Support Price (MSP). This is also a complete lie and a betrayal to farmers. We will continue to remain committed to ensuring the correct price to the farmers for their production. Now farmers will be able to sell their productions to anywhere and get desirable prices," he added.

With the amendment to the Act, farmers will now be able to sell their production anywhere.

The farmers, however, took to streets to protest against the amendment to the Act, which has already been passed in Parliament's lower house Lok Sabha, where the BJP enjoys a comfortable majority.

Facing protests and perhaps sensing the political repercussions in home state Punjab which has an agricultural base, Akali Dal MP Harsimrat Kaur Badal resigned as the Minister of Food Processing Industries on Thursday.

Taking a dig at Badal's step, Punjab Chief Minister and Congress leader, Captain Amarinder Singh, tweeted, "Harsimrat Kaur’s decision to quit Union Cabinet is another in the long chain of theatrics being enacted by the Akali Dal which has still not quit the ruling coalition. It's motivated not by any concern for farmers but to save their own dwindling political fortunes. Too little too late."

Harsimrat Kaur’s decision to quit Union Cabinet is another in the long chain of theatrics being enacted by @Akali_Dal_ which has still not quit ruling coalition. It's motivated not by any concern for farmers but to save their own dwindling political fortunes. Too little too late.