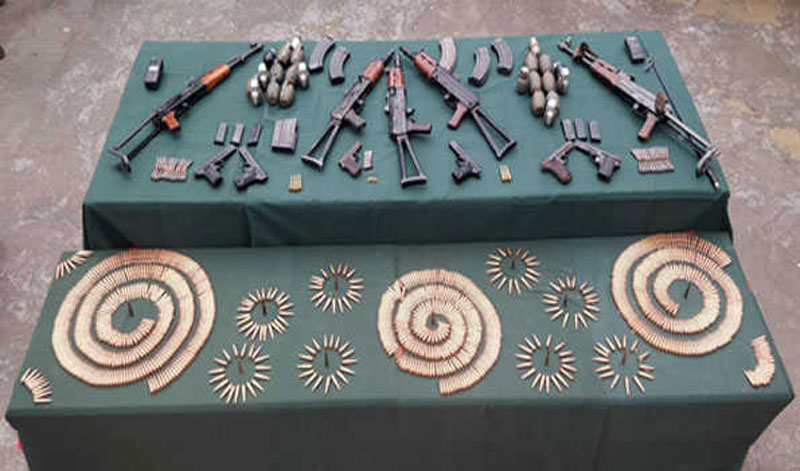 Jammu and Kashmir: Attempt to smuggle in war-like stores from PoK foiled by troops in Baramulla

Srinagar/UNI: Alert troops foiled a militant attempt to smuggle in arms and ammunition from Pakistan- occupied-Kashmir (POK) into the Kashmir valley when they recovered war like stores, including automatic weapons and grenades near the Line of Control (LoC) in north Kashmir district of Baramulla.

Senior Army and police officials have already said that militants are facing acute shortage of arms and ammunition in the valley after successful operations by the security forces at the LoC and hinterland.

A defence ministry spokesman Col Rajesh Kalia told UNI on Tuesday that on August 30 movement of suspicious persons was detected along the LoC in Rampur Sector in Uri in north Kashmir district of Baramulla.

He said the movement was from a village close to the LoC and the suspected persons had infiltrated into Indian territory. Their move however, was kept under constant surveillance, he said.

Col Kalia said that due to adverse terrain, thick foliage, and bad weather conditions alert was sounded for likely infiltration attempt. Surveillance Grid was beefed up across the area and ambushes were re-sited to thwart any such attempt. Surveillance continued through the night, he said.

Defence spokesman said during the subsequently, on August 31 at approx 0500 hrs, search of the area was carried out. After extensive search of seven hours, a huge cache of arms & ammunition were recovered from well-concealed locations in 2 hideouts in Rampur Sector.

Col Kalia said the area has villages ahead of the Anti-infiltration fence. The Modus operandi is to leave War Like Stores along the LoC which is subsequently picked up by Over Ground Workers (OGWs) or militants for further transportation into the hinterland to be used for terror activities.

These attempts expose the desperation of Pakistan based terror groups to infiltrate weapons into J&K, with active connivance of Pakistan Army. Robust surveillance and LoC domination will continue to deny all such misadventures.

Militants are making desperate attempts to snatch weapons from the security forces and police personnel in the valley, where the ultras are facing shortage of weapons.