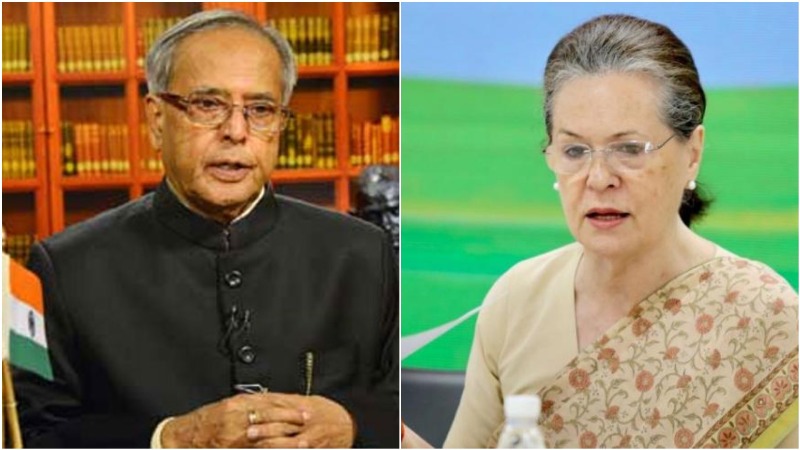 New Delhi/IBNS: Congress President Sonia Gandhi on Monday condoled the death of former President Pranab Mukherjee, who was also a stalwart leader of the 134-year-old party.

In her letter to Mukherjee's daughter Sharmistha, Gandhi wrote that the veteran politician had played a crucial role both in shaping the course of events as well as actively participating in them, whether as a cabinet minister, parliamentarian or President of India.

“Pranabda had been such an integral and prominent part of national life, the Congress party and the central government for over five decades, it is hard to imagine how we can do without his wisdom, experience, sage advice and deep understanding of so many subjects,” Gandhi wrote in the letter.

"His life over the past 50 years mirrored 50 years of the history of India, for he played a crucial role both in shaping the course of events as well as actively participating in them, whether as a cabinet minister, parliamentarian or President of India,” she said.

“I personally have so many warm memories of my working with him, and I learnt so much from him,” Gandhi said about her former party colleague.

Mukherjee's entry into politics was a low-key affair with a Congress ticket to Rajya Sabha, the upper house of the Parliament, by then Prime Minister Indira Gandhi.

But in a short span of time, Mukherjee became Indira Gandhi's most trusted person and a minister in her cabinet.

In fact, despite being number two in the mighty Congress during the Indira Gandhi regime, his political aspirations succumbed to his party's trademark dynasty politics.

Indira Gandhi's son Rajiv Gandhi, who was nowhere in the Indian politics unlike his late brother Sanjay, made an unexpected entry, that too with the PM's post, leaving Mukherjee sidelined in the Congress.

Mukherjee's political career was rebuilt only after Rajiv Gandhi's assassination in 1991.

Under PM PV Narasimha Rao, he was appointed as the Planning Commission head in 1991 and India's Foreign Minister four years later.