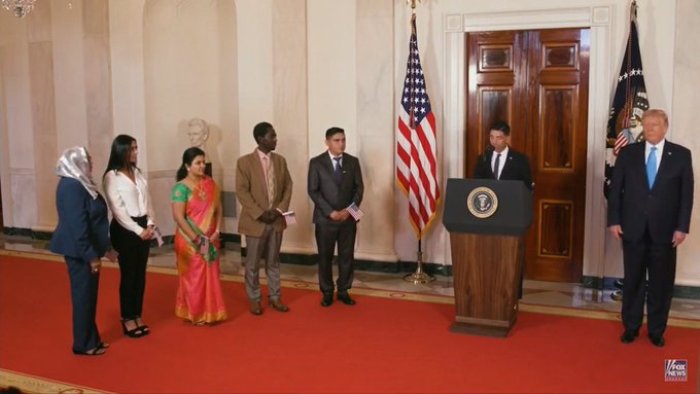 Washington/IBNS: An Indian software engineer was sworn in as an American citizen along with four other immigrants in a rare naturalisation ceremony at the White House, which was presided over by US President Donald Trump.

The five immigrants who got the US citizenships during the ceremony are from India, Bolivia, Lebanon, Sudan and Ghana.

All of them held the US flag in their hands as they were administered the Oath of Allegiance by Acting United States Secretary of Homeland Security Chad Wolf.

India's Sudha Sundari Narayanan, a software developer by profession, was among those sworn in as American citizens.

Welcoming them, Trump said: "Today America rejoices as we welcome five absolutely incredible new members into our great American family. You are now fellow citizens of the greatest nation on the face of God's Earth. Congratulations."

Speaking of Narayanan, he said "Sudha is a talented software developer and she and her husband are raising two beautiful, wonderful children 'the apples of your life''. Thank you very much and congratulations. Fantastic job."

Trump himself handed her the Certificate of Citizenship.