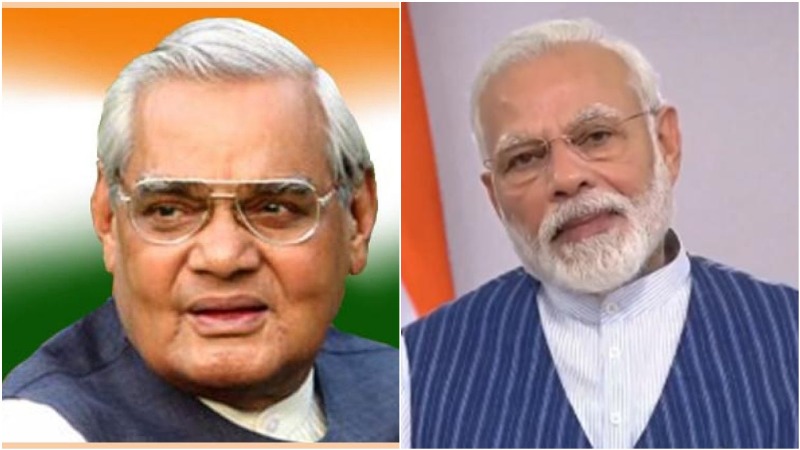 Modi posted a nearly 2 minute-long video that showcased a collection of old images and video clippings of Vajpayee providing glimpses of his long political career.

Tweeting the video, Modi wrote: "Tributes to beloved Atal Ji on his Punya Tithi. India will always remember his outstanding service and efforts towards our nation's progress."

A voiceover by PM Modi could be heard supporting the video which states: "This country will never forget Atal ji's sacrifice. Under his leadership India held its head high as a nuclear power. As a politician, a Member of Parliament, a minister or Prime Minister, Atal ji has performed very well in many roles. Many great things can be said about Atal ji's life, and no one aspect is lesser than the other."

"His speeches used to be talked about. In future if some expert analysed his speeches, the strength in his silence would turn out many times stronger than his speeches. In parliament also, he would only say a few words. People would get the message from his silence..."

Greetings on Parsi New Year. India cherishes the outstanding contribution of the Parsi community, which has made a mark in a wide range of fields.

May the coming year bring peace and prosperity in everyone’s lives.

"Bharat Ratna Shri Atal Bihari Vajpayee ji was the voice of patriotism and Indian culture. He was a dedicated politician as well as a skilled organiser who played an important role in the foundation and growth of the BJP and inspired millions of workers to serve the country," he wrote

A member of the Bharatiya Janata Party (BJP), he was the first Indian prime minister not of the Indian National Congress to serve a full term in office. He was also noted as a poet and a writer.