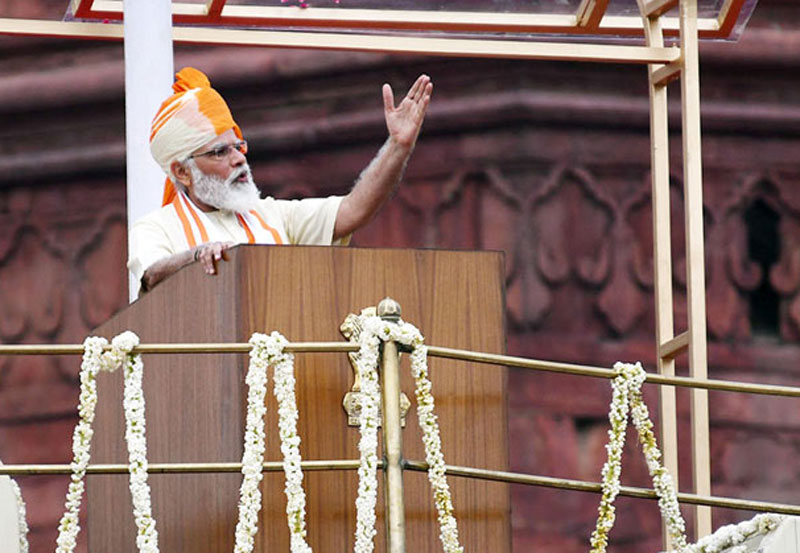 6 lakh gram panchayats, including Lakshadweep, to be connected with optical fibre in next 1,000 days: PM Modi

New Delhi/UNI/IBNS: Prime Minister Narendra Modi on Saturday announced that in the next 1,000 days, all six lakh gram panchayats of the country will be connected to the optical fibre network.

Modi said this while delivering his Independence speech from the ramparts of the Red Fort on the 74th Independence Day.

''In the coming 1000 days, every village in the country will be connected with optical fibre,'' he said.

The Prime Minister said that before 2014, only five dozen panchayats in the country were connected with optical fibre.

''In the last five years, 1.5 lakh gram panchayats in the country have been connected with optical fibre,''  Mr Modi said.

Pointing out the critical role of Digital India campaign in time of Coronavirus pandemic in the country, he said:

''In the time of coronavirus crisis, we have seen what the role of Digital India campaign has been,'' the Prime Minister said, adding that all the villages will be covered in the optical fibre network, including the Lakshadweep islands located off the Kerala coast.

Underscoring the significance of critical role of technology in the nation's development, he said such a network will connect every citizen digitally.

“The Indian territory has around 1,300 islands. Keeping in mind their geographical location and their importance in the nation's development, work to begin new projects in a number of these islands is underway.

"We have chosen some islands for fast paced development of the nation. Recently, we connected Andaman & Nicobar Islands with an undersea cable for a better internet. Next, we will connect Lakshadweep,” the Prime Minister said in his speech.

The archipelago will be connected to submarine optical fibre cable and the project will be completed within the stipulated time, he added.